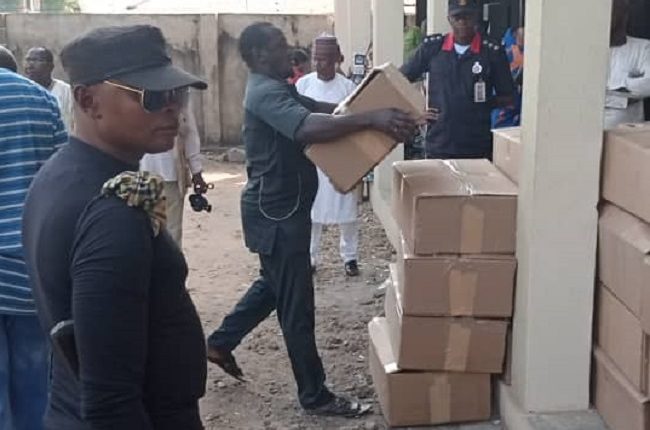 The delivery of the materials was witnessed by stakeholders including the Inter-Party Advisory Council (IPAC), security agencies, Civil Society Organisations, among others.

Receiving the materials in Lokoja, the Hon. Chairman of the Commission, Mamman Nda Eri said they would be moved to the field in record time, a demonstration of the commission’s readiness for the election.

While giving assurance on the security of the materials, the chairman said the commission had beefed up its security architecture, saying if the materials were received earlier, they would have been kept in the banks.

Eri reiterated the commission’s readiness for credible polls, disclosing that the staff had been working round the clock to ensure acceptable polls on Saturday.

Speaking, the Kogi State Commissioner of Police, Ayuba Ede who was represented by a Deputy Superintendent of Police, Elvis Aguebor said the police was ready to ensure the safety of lives, property and the election materials.

The commissioner warned against any form of destabilisation, saying his men would not hesitate to enforce the law and protect the electioneering process in case of any eventuality.

He assured the public that the exercise would be hitch-free, especially given that memoranda were signed between the police and other stakeholders for a peaceful election.

The State Chairman of Inter-Party Advisory Council( IPAC), Hon Iliyas Badanga gave kudos to KOSIEC for its topnotch preparedness and expressed hope that the outcome of the election would meet the satisfaction of all.

Other respondents who spoke in the same direction, applauded the election umpire for its transparency, expressing hope for a successful election.