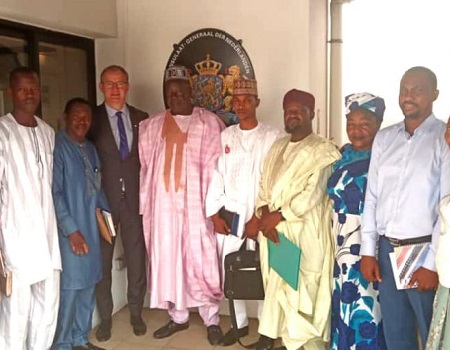 In a bid to advance the nation’s agricultural sector, the National Groundnut Producers Processors and Marketers Association of Nigerian (NGROPPMAN) has described it’s working visit to the Netherlands’s Embassy at Lagos Nigeria as a roadmap to boost the nation’s economy.

Hon. Aimu Foni in describing the product said groundnut is one commodity that virtually all parts are useful to both humans and animals but wondered why Nigeria’s government is yet to give it the needed attention.

Earlier, he identified the off-takers of the product as a major setback which he said formed the bases for the courtesy visit to the Netherlands Consulate general.

According to him “Groundnut is a useful product which virtually all parts of it are useful to both humans and animals… If the government of Nigeria will come in and assist the farmers to produce more and the Netherlands government off-takes it, then we will have no problems.”

Speaking further he said “we had a problem with seeds but that has been settled because in Zaria we now have those people that are ready to provide us with the best seeds, so we are okay in that area”

He added “we have many states that produce groundnuts in Nigeria especially in the North and Central part of the nation but what matters most is the off-takers,” he said.

On his part, the facilitator of the visit Mr. Abdulrazaq Usman (Vice president ii) when giving his remarks said Nigeria is the third groundnut producing country in the world with the production of 3million tons a year. Usman earlier noted that Europe is a large market for groundnut with an estimate of 500-600 thousand per annum which its importation rate does increase.

Usman, however, said he believed that Nigerian can top the market if given the desired attention by the Netherlands government “we want to establish a relationship with the European countries especially the Netherlands because the Netherlands are the importers of groundnuts” Abdullrazaq Usman

During the closed-door meeting with the Consulate general over the weekends, Mr. Adebayo Adeniyi, National Secretary to the NGROPPMAN when speaking said the association is saddled with the responsibilities of catering for groundnuts farmers especially on professionalism in groundnut producing, processing and marketing.

Mr. Adebayo added that the association is more concerned that Nigeria’s groundnut is currently free from a chemical called “Aflatosin” which enables the products to be used in all parts of the world. In his word “We have reports from Nassarawa state that Nigeria’s groundnuts exported this year were Aflatosin safe” He further appealed to the Nigerians government to always provide Aflasafe and other mechanised pieces of equipment.

Responding to the delegation was the Consul-general Michael Deleen who received the group before handing them over to Nigeria’s representative on Agriculture to Netherlands Mr. Christopher Udoh for onward discussions.

Mr. Udoh while responding thanked the NGROPPMAN delegation for the courtesy visit noting that Nigeria’s groundnut does not end in the Netherlands alone but goes across the European countries.

In another development, he stressed the need for quality certifications as well-advised the NGROPPMAN to continue in keeping standards by identifying with other international marketers.

Earlier he posited that the Netherlands government is open and committed in supporting agricultural programs which according him Nigeria’s groundnut will not be kept aside anymore. In concluding, he promised to review the issues as presented by the association with the Consul-genneral and get back to them in no distant time