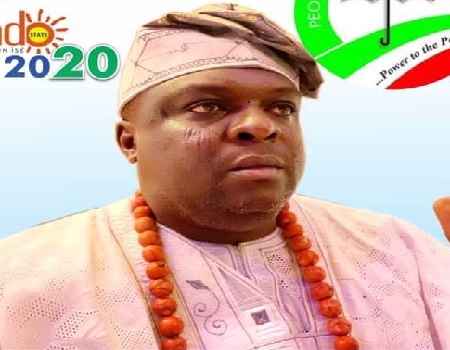 The governorship aspirant on the platform the Peoples Democratic Party (PDP) party in Ondo State, Godday Erewa, has said that governance of Ondo State should be citizen-focused to empower them to be able to stand together in building the economy the state.

Erewa who was at the Wadata Plaza and National Secretariat of the Peoples Democratic Party (PDP) to obtain his nomination and expression of interest form said infrastructural development must go side by side human capacity development for seamless growth of the people and the state.

Erewa said he is in the race to change the narrative of governance by developing the two critical sectors of the economy in Ondo State encompassing aviation, sports and agriculture which has the capacity to create employment, raise IGR for the state and boost the economy.

According to him, while the government sustains its responsibility secures the life and property attracting investment in aviation to serve the Ondo and its contiguous states.

Asked if his chances are not dimmed by the alleged invitation of the Deputy Governor of Ondo State from the ruling All Progressives Congress (APC) by the Party in the state, Erewa said as a technocrat, Ondo will benefit from his expertise.

His words: “We’ve been with the party in good and turbulent times. We build it to what it is now. I am not speaking about other aspirants. I do know that when the storm is at its peak, that is when my strength comes up for everyone to see. I am not deterred. They are welcome to the party but I am confident in picking the ticket.

“The primary purpose of any government is to protect lives and property and I have the wherewithal to do that.”

“If I become a governor, I have earlier told you that I am a technocrat. I have run different businesses and organisations that succeeded and are still succeeding. I have knowledge of modern agricultural farming and I will ensure that mechanised farming takes centre stage when I become governor.

“This will be better than the white-collar job that people are seeking. I will build a stadium in each of the three senatorial districts that will attract investors and attract international matches.

“We have an airport and it will interest you to know that once the airport is developed in conjunction with the relevant agencies, we are going to transform it into an international standard, making it possible for international flights to land and take off from there. This will bring us a lot of international businesses into the state.

“It will also interest you to know that the Ondo State has the largest coastal land (onshore) in the whole of West Africa. We will convert this into a tourist attraction. It will be a tourist destination point between Delta, Ondo, and Ekiti, Kwara and other neighbouring states.

“In terms of aviation, the airport would serve Edo, Ekiti, Osun, Kogi and Kwara states. If people from these states are trooping into Akure for their international trips, we are going to do a lot of human capacity development.

“We are also going to look into our primary education sector as well. We will bring quality education to the doorsteps of our people.”

“Ondo State has the highest number of mineral resources in the whole of Nigeria which is yet to be tapped.

“I will liaise with the relevant agencies to ensure that we tap those minerals and bring about industrialisation that will help the human capital capacity of the common man. The least person on the street will feel the impact of our government.”

There is nothing as ‘State of Osun’, court insists