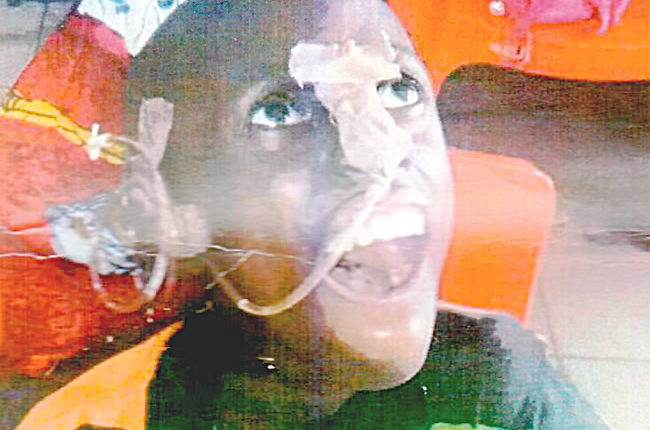 MOTHERHOOD comes with boundless joy. For Florence Chiamaka Chidibem, 43, mother of five children, the coming of the last of her children, Wonderful Chidibem, brought joy and happiness. She named him ‘Wonderful’ on the expectation that everything about the child will be a wonder. The prayer at his christening, 11 years ago, was that everything concerning him would be wonderful and he would be a wonder to his generation and epoch.

And true to his name Wonderful, the boy had normal growth like any other child of his age. He crawled at the normal age, walked when he was due and got enrolled in kindergarten pre-school. He continued his academic pursuits to primary school and when he got to the last class in his primary education, Primary six, he nursed the ambition of enrolling in the Junior Secondary School (JSS), like his classmates. That was in September 2020. That was never to be and may never be, unless help comes his way. At the moment, Wonderful is lying prostrate at the University of Benin Teaching Hospital (UBTH), supported by oxygen and supplication to the Almighty to show him mercy so that he can live!

Wonderful’s mother, Florence, who teaches  at Fluorite High School, a private secondary school at Oluku, on the outskirts of Benin City, Edo State capital, where she teaches English Language and Social Studies, while narrating the deplorable condition of the 11-year old boy, said that her son was bubbling with life until tragedy struck in September 2020, when the boy complained of stomach ache.

She said: “I have five children of three girls and two boys. Wonderful is the last born. In September 2020, he complained of stomach ache and I first took him to a hospital that is close to the house and I was asked to take him to UBTH. He has been in UBTH since January 2021 and I have spent more than two million naira. I have sold off everything I have because his father, my husband, died in 2009. He is presently on oxygen at the hospital”.

What ailed the boy, Wonderful? The distraught Mrs. Chidibem, who pranced into the Nigeria Union of Journalists (NUJ), secretariat on Friday, April 30, presented the little boy’s ailment, vide a letter dated 15th February, 2021 and endorsed by Dr. Y.T Israel-Aina, a paediatric oncologist and Professor C. Omuemu, chairman, Medical Advisory Committee, (MAC), and Director, Clinical Services and Training, both of UBTH, as  “Hodgkin’s lymphoma”.

The letter, titled, ‘Re-Chidubem Wonderful, M1 Years’, state: “The above named is an 11-year-old boy who is managed for Hodgkin’s lymphoma. He presented 6 weeks ago with complaints of Hodgkin’s lymphoma, which is blood cancer”.

“The investigations done confirmed that he has the disease. He has been on chemotherapy and has had several blood transfusions and other supportive medications. Currently, he needs to continue chemotherapy and may need other treatment like radiotherapy for cure of his disease. The mother has spent a lot of money for his treatment so far. She requires further financial help to support his treatment as chemotherapy drugs are quite expensive and radiotherapy is even more expensive. The mother will like to use this medium to solicit for financial help for her child”, the letter added, and pleaded “kindly accord her the necessary help in raising funds for this child’s treatment”.

The devastated mother further disclosed that the doctor in charge of Wonderful’s treatment had advised that the boy be taken to a hospital in Italy, where the ailing boy could get the required treatment as the teaching hospital appeared to be at the end of its tether as far as the treatment is concerned.

“They did not tell me how much the hospital in Italy will cost. But another parent who had been to the hospital in Italy said she spent twenty something million naira. I don’t have twenty-something thousand naira as I have sold off all that I have treating him. The consultant at UBTH told me that if I want my child alive, I should take him to Italy. I want my child to live and that is why I am appealing to good spirited Nigerians to come to my aid”, she pleaded.

Mrs. Chidibem confirmed that when the ailment started, “ three of my in-laws gave me money. One gave me N100,000, another gave me N50,000 and the third one gave me N20,000. These are not even enough to buy one week of drugs for one week. Chemo treatment is N350,000 every 14 days. Now, he is in a coma  and the doctor said it is because he is not being given the right drugs and I don’t have the money for the right drugs”.

To save Wonderful’s precious life, the sum of N28 million is needed to cover hospital bills and logistics in Italy and back. While God is the ultimate giver of life, whether Wonderful will live to fulfill destiny depends on how soon the mother, who teaches in a private school, where her take home package cannot take her home, can raise the money.

Some agonies are better imagined than experienced!

Fayemi, Tinubu and the macabre dance for 2023

At forum, participants ask Nigeria to join advocacy against production of lethal…