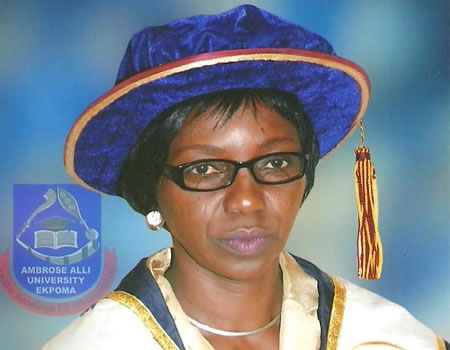 The professor of Law reportedly died at about 5 pm on Friday at the University of Benin Teaching Hospital (UBTH).

Public Relation Officer of AAU, Mr Edward Aihevba, who confirmed the incident, said the institution was yet to get full details of Prof Agbebaku’s death.

“The University is distraught, we are confused and sad. We are yet to get full details of her death. We have no details yet, we have not confirmed anything, but we heard she died of a protracted ailment.”

The late Agbebaku who was born in 1961, was a pioneer law student of AAU in 1981 and became acting vice-chancellor of her alma mata in May, 2011.

Meanwhile, the Edo State government has reacted to the death of Prof Agbebaku, saying she would be remembered for bringing direction and stability to AAU.

A letter of condolence signed by the Secretary to the State Government, Osarodion Ogie, urged the late Prof Agbebaku’s husband, Prof Philip Agbebaku, and the family to take solace in the fact that she contributed a great deal to the development of various segments of society, especially the educational sector in the state.

“It is with a heavy heart that the Edo state government received the sad and sudden death of Prof. (Mrs) Cordelia Ainenehi Agbegbaku, the first female Vice-Chancellor, Ambrose Alli University, Ekpoma who died on Thursday.”

While the state government, on behalf of the people of the state, condoles with Prof Agbebaku, Obaseki said, “I realize without doubt that her exit will leave you, members of the family and the university community with considerable trauma following the unexpected occurrence.”