MetroLatest News
By Johnson Babajide - Makurdi On May 6, 2020 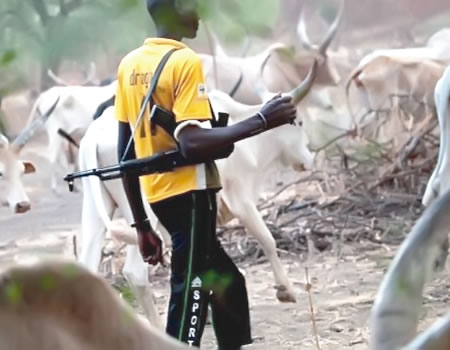 Barely one week after suspected herdsmen beheaded a farmer in his farm at Tse Vambe of Mbama in Guma Local Government Area of Benue State, a man and his pregnant wife have also been shot dead by suspected marauding herdsmen in the same council area.

The fresh attack occurred early hours of Wednesday at Tarkende Village near Umenger District in Guma Local Government Area when the villagers were asleep.

A native from the area who did not want to be mentioned said that the suspected herdsmen invaded the village around 1.30 am on Wednesday where they shot a man and his pregnant wife dead.

He said, “It was early hours of this morning, precisely 1.30 am while everyone was asleep that we were woken up by sporadic gunshots from all directions.

“Everyone started running helter-skelter to escape the rampaging herdsmen, but by the time some youths went back to the village at daybreak the lifeless bodies of the man and his pregnant wife were seen on the ground few meters away from their house, suggesting that they might have been shot dead while trying to escape.”

Chairman of Guma local government, Anthony Shawon, who confirmed the report, said that a woman who narrowly escaped the onslaught reported the attack to him.

Shawon explained that according to the report, the marauding herdsmen invaded the village at about 2 am on Wednesday and started shooting sporadically in all directions while the villagers scampered out of their sleep into hiding.

He said that the woman told him that she ran for about 30 kilometres before she got to another village.

“The herders came at 2 am and pitched their camp all over the place. They are grazing and killing people.

“As we speak, Chief of Ujaende is with me begging that the army should come and patrol their area so that they can go to the farm. That is the situation in all parts of Guma,” the council boss said.

The spokesperson for Police Command in Benue State, DSP Catherine Anene, said the command received a report of herdsmen attack in the area and that the command had dispatched its men to the place.

“Yes, we received the report. Somebody actually called to alert the police and as I talk to you now, a team of policemen has been sent to the area to confirm the incidence.

“The team is on its way to the area and the media will be briefed appropriately on the matter when the team returns,” Anene said.