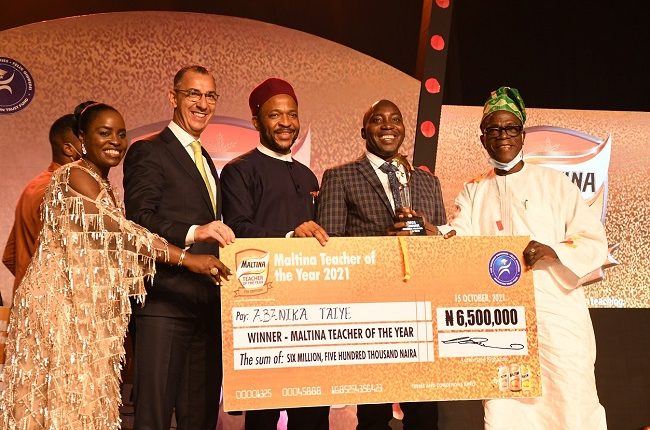 A teacher from James Hope Royal College, Agbor, Delta State, Mr Taye Abanika, has emerged the winner of this year’s Maltina Teacher of the Year(MTOY) Award.

Mr Isaac Pave from Taraba State and Margaret Ofordun from the Federal Capital Territory won second and third place of the award, respectively.

Abanika was announced the winner last Friday night at the grand finale of the 2021 MTOY award ceremony held at Eko Hotel and Suites, Victoria Island, Lagos with the Vice President, Prof Yemi Osinbajo, who was represented at the event by the Minister of State for Education, Mr Chukwuemeka Uwajiuba, the Lagos State governor, represented by the state’s Commissioner for Education, Mrs Folasade Adefisayo; registrar of the Teacher’s Registration Council of Nigeria, Prof Josiah Ajiboye; National Secretary, Nigeria Union of Teachers, Dr Mike Ene; President of All Nigeria Confederation of Principals of Secondary Schools, Mr Anselm Izuagie, among others in attendance.

With his emergence as current MTOY Award winner, Abanika, who teaches Design Technology, became the second teacher from Delta State to win the award as Mr Felix Ariguzo who was then teaching at Master Care International School Asaba won the 2017 edition.

MTOY award, an annual event with this year’s edition seventh in the series, is an initiative of Nigerian Breweries Plc domiciled under its humanitarian arm- Felix Ohiwerei Education Trust Fund- to identify and showcase committed and hardworking secondary school teachers nationwide and consequently lift the education sector and the economy as a whole.

However, Abanika is rewarded with a gold trophy, a certificate of excellence and N6.5 million money prize in all for the achievement and the money is spread for five years-N1 million and N500 000 for being a national and state champion respectively and N1 million to be paid yearly for the next five years if he remains as a teacher and he would also attend all-expenses-paid capacity development programme abroad.

His school would also be provided with a block of six classrooms or any other facilities as preferred for producing him.

In his remarks, the Vice President, Prof Yemi Osinbajo, who was represented by the Minister of State for Education, Mr Chukwuemeka Uwajiuba, commended Nigerian Breweries for providing the platform, saying the impact of MTOY award had truly shown in the performance of both the teachers and their students and also the education sector generally.

Speaking also, the Lagos State governor, who was represented by the state’s commissioner for education, Mrs Folasade Adefisayo, said teachers are critical stakeholders in the education sector and therefore deserved recognition and celebration by society.

Teachers’ roles in the development of human society, he said, cannot be quantified.

In his own remarks, Registrar, TRCN, Prof Josiah Ajiboye, lauded the MTOY award initiative, urging other corporate organisations and philanthropic individuals to take a cue from Nigerian Breweries gesture by joining government at all levels to provide more befitting learning and teaching environment for schools nationwide.

Speaking earlier, the Managing Director of Nigerian Breweries, Mr Hans Essaadi, noted that an independent panel of judges headed by a renowned political economist, Prof Pat Utomi assed all the entries, 1 085 in all, received this year from which the best three emerged.

He said the entries for this year was lower than that of last year, adding that the import of teachers became more pronounced during the general lockdown last year due to COVID- 19 when all schools were shut and students were at homes but still learning remotely.

He emphasised that the award initiative was to recognise hard work and diligence among teachers and celebrate them so as to boost their morale and their colleagues for improved performance and by extension, education development of the country.

Essaadi explained that through the education trust fund, the company had rewarded a total of 148 teachers, built up to 417 classrooms, equipped many libraries and numerous toilet facilities in both primary and secondary schools across 74 communities nationwide.

He promised that the company would continue to add value to the teaching profession, the education sector and the economy as a whole.

The previous winners of the award starting with the immediate past to the first are Miss Oluwabunmi Anani(Adamawa State), Mr Collins Ezem(FCT); Mr Olasunkanmi Opeifa(FCT); Mr Felix Ariguzo(Delta State); Mr Imoh Essien(Akwa Ibom State) and Mrs Rose Nkemdilim Obi (Anambra State). And virtually all of them attended the event.

No space, facilities for pregnant students in Elizade University ― VC