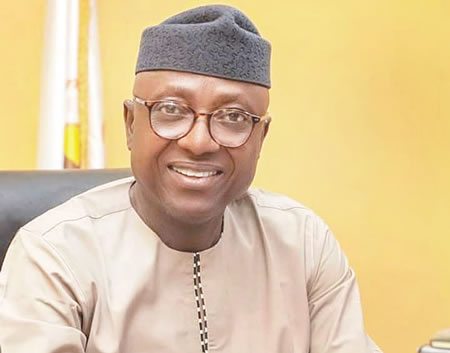 Going through Funminiyi Afuye’s intimidating profile without ever meeting him, one will take the Right Honourable Speaker of the Ekiti State House of Assembly for a combatant considering his deep-rooted antecedents in human rights activism and as a lawyer of close to three decades.

Seeing the Ikere-Ekiti-born experienced legislator at a glance, you will take him for granted for his innocuous appearance that depicts a complete gentleman, who cannot hurt a fly. He is though; Afuiye is highly principled. He has devised a superlative means of achieving serious legislative business through intermittent comic reliefs in the hallowed chamber.

The making of Afuye as the speaker of the Ekiti sixth Assembly did not just occur as a coincidence as he has paid his dues not only as an astute politician but as an experienced legislator who had served in various capacities, particularly as the Leader of Business during the turbulent government of Engineer Segun Oni otherwise known as the 13-13 Era. It was an era when the Peoples Democratic Party (PDP) had 13 lawmakers and the then Action Congress of Nigeria (ACN) had 13, while legal battle raged to wrestle power from the PDP governor in the state.

Unlike the experience in the last two assemblies in the state, where legislators cross-carpeted to the ruling party in order to enjoy crumbs from the governor, Afuye and his team stood firmly during the 13-13 Assembly and this was what later paid off for him to become a celebrated hero of democracy which has boosted his political profile.

Shortly after leaving the third Assembly, Afuye became the state commissioner for information and civic orientation; and later commissioner for integration and intergovernmental affairs under the government of Dr John Kayode Fayemi before he was re-elected to the Assembly where his colleagues found him worthy to lead them as the speaker.

On his assumption of office as the speaker, Afuye entered into an unwritten pact with his colleagues to always toe the part of peace and this is what has kept them waxing stronger as one indissoluble body in this sixth Assembly.  In the history of the Assembly, the hollowed chamber now witnesses a relaxed mood of legislating with unending banters and rib-cracking jokes even while serious business of lawmaking goes on unabated.

Almost each of the 26 lawmakers has his or her own style of introducing him or herself and this endears all, who work in Assembly complex to witness each plenary because it is devoid of rancour and throwing of chairs which characterized most state assemblies across the nation. Afuye is of the opinion that, “It is in an atmosphere of peace that lawmakers can stand up to talk with candour and pride to eloquently present issues affecting their constituencies.” This explains why he interjects them occasionally with some anecdotes to spice up their motions.

The Ekiti Assembly hallowed chamber is usually full of convivial intrigues as the speaker traditionally calls on the Majority Leader, Honourable Gboyega Aribisogan, to present the business of the day which he also does in a dexterous manner, having garnered experience in the previous assembly where the erstwhile Governor Ayo Fayose gave him a political baptism of fire.

One interesting thing is that the speaker always starts on a very lighter note, observing the appearance and mood of each legislator as he or she stands up to talk. Apart from creating a comic relief, Afuye jocularly engages the lawmakers while presenting their motions, especially when he needs to commend or correct them.  A few examples readily come to mind.

One of such is whenever the Honourable representing Ekiti South West Constituency, Chief (Mrs) Yemisi Ayokunle stands up to talk and introduce herself. She will say: “I’m Honourable Mrs Yemisi Ayokunle, from United Kingdom of Ilawe in Ekiti South West Constituency 1.” In response, the speaker will smile and say: “Olori, you are recognised because I don’t want you to withdraw my wife (who is from Ilawe) from me.”  Yemisi, who is also the Chairman, House Committee on Media, will answer in return: “Not only that Mr. Speaker sir; you know the Clerk of this House is also from Ilawe” and the whole Assembly will beat the table as a sign of applause or clapping. HonourableBunmiAdelugba, the Chief Whip who is from Emure constituency, will always introduce her Constituency as EmureUleEwa,meaning the Home of Beauty. Such is the filial piety that reigns supreme in the Ekiti Assembly.

Ministry Of Defence, Others Make Presentations As Buhari Presides Over Virtual FEC

The plenary of January 28, 2020 was particularly full of fanfare, as the members were just returning from the New Year break and everyone was highly elated and decked in different attires. It was the day the bill on the Western Security Network Agency otherwise known as Amotekun Corps Agency was sent to them for passage.  Virtually, all the lawmakers addressed themselves as Amotekun so and so, using Amotekun as a prefix, instead of the usual Honourable.

What added glamour to the sitting of that day was that three of them just returned from the Republic of South Korea, where they attended the 1999 International Bar Conference.  It was not a little surprise when Honourable Adeoye Aribasoye from Ikole 1 wanted to talk and he started speaking in “tongues,” calling some unknown Korean slangs, which threw the whole Assembly into a loud laughter.  Honourable. Tajudeen Akingbolu, representing Ekiti West Constituency 1, also a lawyer in the House and deputy Majority Leader, took over and began to say: “ching, chong, chang.”  It was the speaker, who later explained that their “speaking in tongue” was one of the takeaways from the International Bar Association in Korea, which he also attended.

Another legislator one cannot forget in a hurry is Honourable Tunde Idowu, representing Ikere Constituency 2, who is regarded as the Patrick Obaigbon (aka)Igodomigodo of the House as he will always speak roof-blowing and rib-cracking grammar that sends the House agog. There are some intrepid members in the House whose vibrancy the speaker does not ignore. Among them are: Honourables Teju Okuyiga (Gbonyin) Johnson Oyekola Adeoye (Ekiti West 2); Femi Akindele (Irepodun/Ifelodun 1);Toyin Lucas (Ado 1), Adeyinka Ajibade (Moba); Juwa Adegbuyi; Fawekun (Ido Constituency); Yemi Osatuyi (Oye); Kemi Balogun (Ado 2) and Ayodeji Ajayi (Ise), just to mention a few.

As we have the rib crackers so also we have those who hardly smile but who can be categorized as bridge builders. The deputy Speaker of the House, Rt Hon Hakeem Jamiu is a repository of residual knowledge and a typical example of someone who has an unflinching support for the speaker. In short, he is more of a workaholic legislator, whose fingers are always at work on his software as a former columnist in different newspapers. Like the deputy Speaker, Honourable Emmanuel Oso, a retired permanent secretary is another stabiliser in the Assembly, whose wealth of experience, when it comes to due process, cannot be over-emphasised.

In a nutshell, the House is blessed with different talents and crop of highly cerebral lawmakers, who can stand on their own in any legislative gathering. They are a special brand to behold.