Features
By YEJIDE GBENGA-OGUNDARE On Feb 12, 2021 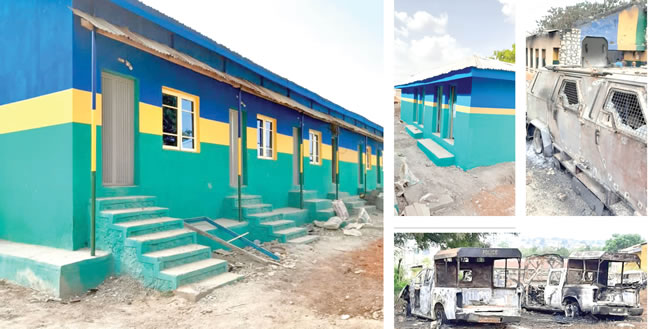 As part of efforts to secure the town and after spending N7.3 million to reconstruct the only police station in Iseyin community, which covers three local council areas and was destroyed during the 2020 EndSARS nationwide protest through communal effort, Iseyin Development Union is asking the government to intervene by establishing more police posts, deploying more personnel, creating an area command and helping to complete the main building of the destroyed police station. YEJIDE GBENGA-OGUNDARE reports.

Like many towns across the country, especially in the South West, Iseyin community is still reeling from the impacts of the destruction that followed the nationwide EndSARS protest of 2020 as the town is currently groaning under the financial burden of securing their town while still counting their losses.

For the community, the destruction of the only police station that services Iseyin and surrounding towns which consists of three local councils; Iseyin Local Government, Iseyin South Local Council Development Area and Araromi Local Council Development Area in Ado Awaye by hoodlums during the protest was a huge challenge as it not only made the town vulnerable in terms of security but also exposed the people to internal and external threats.

And as a people that believe that security should not be left for government alone, they stood up collectively to rebuild the station through communal efforts in a bid to assist the government and also speed up the process of restoring normalcy to the town to discourage evil-minded people from capitalizing on the exposure and seeming vulnerability of the town.

Aside taking up the Herculean task of rebuilding the police station, they also created a synergy between local hunters and vigilante groups with the Operation Burst officials to secure the town pending the full return of the police to the town.

Nigerian Tribune learnt that the process of returning officers to the town has already commenced as a new Divisional Police Officer was deployed to the town last week and the town has already made the police station functional after rebuilding a 14- room building, putting in place a perimeter fence, construction of conveniences, cells and armoury.

They are now asking government to intervene by helping to build the main building in the station and also creating more police posts across the town with an area command as the only station cannot adequately cover the large terrain and also deploy more personnel to ensure security is shored up in the town which is important to the movement of goods and farm produce within the state.

Speaking on the issue, the national president of Iseyin Development Union, Alhaji Bayo Raji, described the experience of the town during the protest and the aftermath as a bitter one as the destruction of the police station affected the community as a whole, in terms of economy and security.

According to him, “the destruction of the police station affected our economy because immediately after the vandalisation, banks refused to open and operate and many stores also closed up. I must add that local security stepped in; local hunters, members of Oodua Peoples’ Congress (OPC), the vigilante in collaboration with Operation Burst tried their best to secure the town. Also, the vigilantes and local hunters recovered most of the looted goods, things like generating set, mattresses and motorcycles were recovered from looters,” he said.

Speaking further, Alhaji Raji stated that “we have only one police station and even before the EndSARS protest, we had been clamouring for more police posts because Iseyin has more than 490,000 people and we require about five division police stations and an area command to adequately secure the town. We were clamouring for this when the EndSARS came and the only police station was destroyed and burnt; things got worse and we were exposed.

“Since that time, we have been rallying our people from Iseyin irrespective of status or age to contribute so we can rebuild the police station and also ensure adequate security. We have been making use of a joint security network of local vigilantes and are now hoping and praying for government’s intervention. While we have done what we can in rebuilding the destroyed police station, we want government to help us by posting more police personnel to adequately cover the terrain because the land mass covered by that single station is huge.

“We have rebuilt a 14-room building completely; from bricklaying to carpentry, electrical work and even provision of furniture. We have also made arrangements in terms of required offices like the armoury and cells, done perimeter fencing and we have put in more conveniences than they had before, we even constructed three major soakaways because the compound has three buildings

“We have put financial strain on our people to get this massive job done. We took it up not because government asked us to do so, but because as a people, we know the importance of security and we also know we cannot leave everything for governance, so we decided to assist in government to speed up things. What we need now is adequate number of personnel and more police posts, at least five more and an area command because Iseyin Police Station controls a large expanse of area consisting of many communities. We have modernised the station, government should take it up from there and help with work on the main building,” Raji said.

Also speaking, the Ikolaba of Iseyin Land, High Chief Ismail Omotoso Odubiyi, told Nigerian Tribune that “after the EndSARS protest, what we have spent on the police station is about N7.3m, we need another N4m to complete renovation of the police quarters and that is what we are trying to raise now. Also, we have done the perimeter fencing in addition to renovating major parts of the police station; we built the armoury and two cells, so it’s the quarters we want to face now and we are raising money for that.

“We appeal to the government to help in reconstructing the main building of the police station and send more officers. We thank the Oyo State government for its efforts, a new Divisional Police Officer just got deployed to Iseyin but we need help, government should help with the main building and send back police officers to the community to start working because the vacuum created by their absence is dangerous,” High Chief Odubiyi stated.

Nigerian Tribune was able to speak with two of the three caretaker chairmen of the local councils being covered by the destroyed police station as efforts to reach the last chairman were unsuccessful. Speaking to Nigerian Tribune on the security situation in relation to the police station, the caretaker Chairman of Iseyin South Local Council Development Area, Hon. Raheem Ajibola, popularly known as FM, stated that things had looked bleak security wise since the EndSARS protest and the efforts of local vigilantes gave hope until recently when the state got a new Commissioner of Police and a new Divisional Police Officer was posted, adding that this is the indication that the police were coming back to the town.

Hon Ajibola, who confirmed the community’s effort and the money spent in reconstructing the police station, stated that as an LCDA and a stakeholder, he on behalf of his council, contributed a million naira to support the project because of his belief in the importance of security and the fact that everyone has a role to play in securing the society.

He reiterated that security is one of the four-cardinal priorities of the present administration in the state led by Engr Seyi Makinde, adding that “before the destruction that followed the EndSARS protest, we saw it coming and we tried to forestall it but because the boys had collected money from somewhere, they refused to listen to the voice of reason.

“Knowing the importance of security, we as a council supported the project fully; financially, morally and physically and I can attest that the town has done much and the government appreciates their efforts. As a council, we have been part of the security architecture even before the protest, we work with the local vigilantes, Operation Burst and DSS and I am always present at the weekly security meetings and I can assure the people that the government is aware of their efforts and will do all that is required,” Hon Ajibola stated.

Also speaking, Hon Abilawon Mufutau Osuolale, caretaker chairman for Iseyin Local Government domiciled at Oluwole Area of Iseyin, stated that his council area had been on top of the security situation long before the EndSARS protest, adding that they already got wind of what was being planned and they made efforts to avert destruction and mayhem by inviting the youths involved to a meeting.

“We were meeting with the youths that we identified as the spearhead of the crisis; we met them about four times before the incident and we were not meeting them alone; we were financing the meetings, trying to educate them on the effect the impending destruction will have on the town and the people but our efforts didn’t yield the desired response, but we thank God that it wasn’t more than that. Even on the day they carried out the destruction, my cabinet members and I were at the palace as early as 6.00am, appealing to the youths, we tried to meet their demands but they weren’t satisfied until they carried out the destruction.

“So after the incident, the town came together to seek the way forward, we met severally to commence rebuilding what was destroyed through communal effort but because of our financial weakness as a council headed by a caretaker, we had only given moral and physical support but plans are in the pipeline because as a council, we have decided to contribute one million naira to the project, we have done the paper works and that will soon be done. But in all, we have been working together with the community and I can attest that the community development council is doing a good job and we are thankful that there are capable people there monitoring the project. The incident set the town back a lot but we know we will overcome the setback,” Abilawon stated.

The new opposition to open grazing