•We moved our trucks out of respect for Buhari—AMATO

Apapa, in Lagos, is known for its gridlock and accompanying gridlock. But a few days prior to the visit of President Muhammadu Buhari’s campaign in the state, the gridlock disappeared with residents and commuters shocked. However, TOLA ADENUBI, after a visit to the Apapa corridor reports that the gridlock has returned leaving a sadder section of commuters and residents. 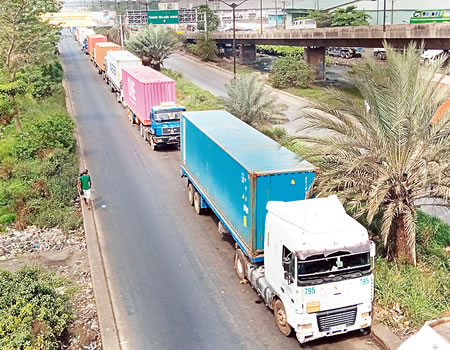 It is no longer news that trucks and petroleum tankers, in their quest to gain access into the nation’s seaports, flood the Lagos highways leading to the ports, thereby causing untold hardship to road users and residents in the state. From Ikorodu road down to Funsho Williams Avenue, across the Ijora bridge vis-à-vis Kirikiri road and Ijoroa Olopa road, the story of trucks and tankers parking in an endless queue has defied concerted efforts to remedy.

The story is not different at the Apapa-Oshodi expressway, as articulated vehicles have converted the expressway into a parking garage, thereby making life difficult for residents of areas like Festac, Satelite Town among others.

But like a miracle, Lagosians woke up last Saturday morning (the presidential campaign day of APC) to discover that all the trucks had vanished. From Apapa-Oshodi express road, and Funsho Williams Avenue, including Ikorodu road, there were no trucks in sight as road users heaved a sigh of relief. Even in Apapa, and the ever choked up Ijora bridge, there was no truck sighted.

According to the chairman, Centre for Values in Leadership, Professor Pat Utomi, “It is a crime, shame that trucks could be moved off the roads just because of a political rally, and are back after the rally. Wherever the articulated vehicles parked during the rally, they should remain there until they get called up to come into the ports. Trucks can’t just park indiscriminately on our roads, it’s not done anywhere in the world.”

Also speaking on the disappearance and reappearance of trucks in Lagos, Mr. Ifeanyi Eze, a Lagos lawyer who resides in Festac wondered where the trucks went during the political rally of President Mohammadu Buhari. In the words of Mr. Eze, “My son told me that as at Friday night, the night preceding the APC presidential rally, the trucks had reduced in number on the roads.

“I stay along Apple junction in Festac extension, and coming into or exiting my area is always difficult because the trucks have lined up along the Apapa-Oshodi express road. At times, they block the access way into the express, and motorists spend hours pleading with them to make way.

“But as at Friday night, I was told their numbers had reduced drastically. It didn’t initially dawn on me why they were leaving until the following morning when I drove out to the express road and saw that the roads were free. There was no trucks or articulated vehicles in sight. The whole place was so free that I prayed it remained like that for ever.

“It was after the political rally and the articulated vehicles returned that it dawned on me that they were moved away because of the visit of Mr. President. My question is, where ever they were moved to during the political rally, they should have stayed there. Why did the authorities allow the trucks back on the roads after Mr. President’s political rally? Could it be deliberate? Who moved them initially? Where did they go to? And why were they allowed back? There are many questions without answers in my head. We, in Festac, live in a cage because of the activities of these articulated vehicles. Whoever moved them away during the political rally should come to our rescue.”

Investigations have however revealed that the articulated vehicles were not moved away by any force prior to the arrival of Mr. President’s campaign team to Lagos. Rather, they left the roads as a show of respect to the nation’s number one citizen.

“If you remember, I have been the apostle of the call-up system for trucks, and what happened on Friday night confirmed what I have been saying that about 85 percent of trucks littering Lagos roads have their garages and parks.

“But because there is nobody to regulate them or inform them of when they should come to the port and load, that is why you see everybody on the roads leading to the ports. So when the directive came from the Lagos State government that all the trucks should vacate the roads because of the presidential campaign rally that held on Saturday, all the trucks returned back to their garages and parks. That was why the roads became free when Mr. President came for his mega rally campaign.

“That confirms what I have been saying. The trucks have their garages and parks, but won’t leave the roads if they don’t know when it is their turn to come into the ports and load. The Nigerian Ports Authority (NPA) has started a manual type of call-up system now. All the truckers have agreed that call-up system is the final solution to indiscriminate parking of articulated vehicles on Lagos roads. We have all agreed that everybody should return to their garages and parks, and wait for their call-up into the ports.”

When reminded that the trucks are back on the roads after the political rally of Mr. President, Ogungbemi explained that the manual call-up system of the NPA has just begun and sensitization is ongoing.

“Enlightenment and sensitization campaign on the call-up system is presently ongoing. Hopefully, by the time everybody keys into the idea, the roads will be free and Apapa will return to its good old days. I will also like to use this medium to inform all truck owners and drivers to vacate the roads and bridges and return to their garages. They should then process their call-up. This arrangement should not be limited to private truck owners alone, it also affects the corporate organsations who own trucks like Dangote, BUA, Flour Mills and others. Everybody should leave the roads and return to their garages to process their call-up. That is the only way our roads can be free,” Ogungbemi added.

Also speaking to the Nigerian Tribune, a truck driver who simply identified himself as Sulaimon urged the authority not to be bias in their implementation of the call-up. “When we heard that Mr. President was coming to Lagos, and that we should all vacate the roads, everybody complied because nobody would want to incur the wrath of the presidency. However, we are back on the roads because some of us don’t trust the judgment of the authorities as regards the call-up system.

“They (NPA) always tend to favour the corporate trucks like Dangote, Flourmills and others. How are we sure that if we return to our garages, we will get called up? Initially when the call up system began last year and some of my colleagues left for their garages, they didn’t get call up for almost three months. Yet, the corporate trucks were allowed into the ports freely without any hindrances,” Sulaimon told Nigerian Tribune.

Ogun: Akinlade and his consolidation message