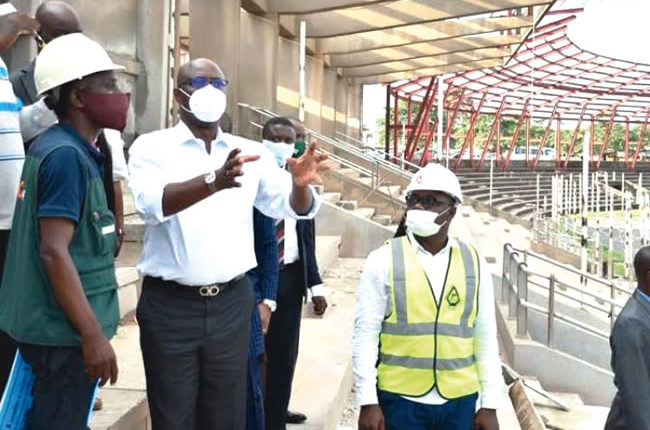 After 44 years of existence, hope arises for the Lekan Salami Stadium, Adamasingba in Ibadan, as the contractor employed by the Oyo State Government to renovate with his money under the Alternate Project Funding Approach (APFA), has started work and has stated that the project will be completed in 18 months. YEJIDE GBENGA-OGUNDARE reports.

Though built in 1976 with a capacity to accommodate 10, 000 people, the Lekan Salami Stadium also known as Adamasingba stadium in Ibadan was opened on May 28, 1988, to be a multi-purpose sports complex and is home to the Shooting Stars football club and the venue for leagues and football matches in Ibadan.

The potential of the sporting complex has however not been optimally utilised due to rot and decay making most facilities moribund as a result of what many believes is a lack of maintenance culture. Over the years, many of the structures have been overtaken by bushes and taken over by reptiles.

And while the state government through many administrations had expressed the intention to give the stadium a facelift, most efforts only stop as decisions on paper and the decay continued to worsen. This however is about to be a thing of the past under the present administration as the incumbent governor led by Engr Seyi Makinde, has finalised plans to remodel the stadium at the cost of N5.5bn.

And to ensure it did not fall into stumbling blocks created by finance like his predecessors, the governor has given out the project under the Alternate Project Funding Approach (APFA).

What then is the Alternate Project Funding Approach (APFA)?

According to Hon Segun Ogunwuyi, the Director General of Oyo State Investment, Public and Private Partnership Agency (OYSIPA), the agency responsible for the arrangement, “APFA is a PPP initiative that has the full backing of the governor and the executive council of Oyo state. What it entails is that we get contractors that can finance projects themselves. So instead of paying a contractor mobilisation fee of like 30 per cent, the contractor will get money and start the project.

“And we don’t pay anything until the project is 20 per cent done and we now pay the rest in installments for like 30 months. So if a project will take 12 months to complete, you have 34 months to pay for it. We have flagged off two projects through this initiative; the 21 km airport- Ajia road which is also a road that is very strategic even for the airport because that means from Ife, you don’t need to come all the way to Ibadan, you can veer off and get to the airport.

“And under the AFPA, we have also flagged off the remodeling of the Lekan Salami Stadium with this initiative. The contractor is already working at the stadium and Oyo State Government has not paid any kobo. It is more of financial management, not waiting till we have much money to do infrastructure because infrastructure drives the economy. Without opening up those roads and real estate, you can’t get the economy moving. That is what the alternative project funding approach is about. So far so good, we have not received any complain from the contractors,” he said.

During the flag off of renovations at the main bowl of the stadium, Governor Seyi Makinde said the contractor would fund the project while the state government would repay over 29 months, adding that the state government had entered a contractual agreement with a company; Messrs Peculiar Ultimate Concerns Ltd, part of the measures to attract investments to the state.

The company, according to him, will remodel the Lekan Salami Sports Complex, Adamasingba, Ibadan, at a cost of over N5.580  and would be funded under the Alternate Project Funding Approach (APFA) which makes it easy for the government to start immediate work without funds, reiterating that his administration would double its efforts to put in infrastructure that would support the growth of internally generated revenue in the state while also ensuring that there is creation create an avenue for everyone to feel the real dividends of democracy.

He reiterated that he entertained no fear that the remodeling would go on without hindrance despite the special funding agreement as the contractor had given the assurance that the project would be completed within 18 months, adding that the project would be completed on schedule and would in no way end the infrastructure revolution his administration had kick started in the state without putting a strain on the people as the emphasis on attracting investors without putting extra burden of taxation on the people.

Confirming that nothing will hinder the remodeling project, the representative of Messrs Peculiar Ultimate Concerns Ltd, the company in charge the project, Olarenwaju Adeleke, stated that the company had commenced work earnestly and nothing would hinder the project, emphasising that the benefit that would be derived from remodeling the stadium would be unquantifiable, bearing in mind that the stadium was planned to be a place of discovery and nursing of talents.

He added that the present capacity of the stadium would be enlarged by 25 per cent to increase the number of people that can comfortably occupy the stadium, adding that all existing facilities in the stadium would also be upgraded and accredited for national and international tournaments while the project would be delivered on time without exceeding the 18 months given.

He applauded the governor’s financial ingenuity in terms of exploring the alternative project funding approach instead of complaining over paucity of fund, adding that it was a revolutionary step towards getting work done in a timely fashion without allowing projects hinder other aspects of governance that needs fund.

As work continues on the sports complex, many sportsmen have expressed the view that this will further aid the development of the sporting sector and practitioners.

And while they are overjoyed that the government has finally hearkened to their cries and is putting the stadium in good condition, some are afraid that the contractor may get tired along the line and renege on agreement.

They however stated that the completion of the remodeling would be the litmus test to determine whether Governor Makinde’s Alternate Project Funding Approach (APFA) system is the new path to tow in providing infrastructure without straining government coffers or depriving the people of basic needs due to paucity of funds.

[OPINION] General Buratai and his golden principle on war