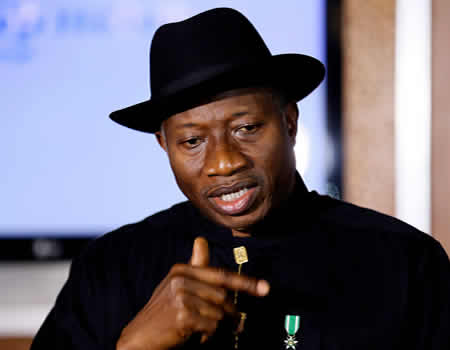 After taking a hard look at the political situation in the country, following the recent governorship elections in his home state of Bayelsa and Kogi, former President Goodluck Jonathan has accused politicians of systematically replacing military coup de’tat with political coup de’tat.

Speaking weekend at the 17th convocation ceremony of Igbinedion University Okada (IUO), Edo state shortly after his conferment with an honorary degree of Doctor of Science, Jonathan deplored the continued recent brutal killing of a female leader of the Peoples Democratic Party (PDP) in Kogi.

The ex-president pleaded with his fellow politicians to stop killing people, destroying properties in a desperate bid to grab power and enjoy the spoil of offices which he insisted are temporal.

At the ceremony where Nollywood diva, Omotola Jalade-Ekeinde was also honoured with a Doctor of Arts, Jonathan said: “Only yesterday in one African country, we were discussing the politics of our continent. Most of us, former Heads of State, Presidents, former presidents and vice presidents. The way Africa politics is going, we are replacing military coup with a civilian coup de’tat and that cannot sustain the continent.”

He continued: “Let me plead with my fellow politicians. They should stop killing the people, destroying properties because people want to own offices.

“What happened in the last governorship elections in my state, Bayelsa and Kogi state,  especially in Kogi state where a woman was burnt alive in her house, is something that should not happen in any normal society. Something is fundamentally wrong with our political system.”

Showering encomiums on Omotola for being a role model to the youths, the former president noted that what makes one in life is not the temporary position gained through politics but the creative ability and God’s given talent in any forms.

He described the founder and chancellor of the institution, Sir Gabriel Igbinedion, the Esama of Benin as a trailblazer who is the first Nigeria to establish a private university and airline, saying that Nigerians were eagerly awaiting the resuscitation of the Okada Air as the aviation industry is expanding in Nigeria.

Obaseki added that his administration placed a priority on basic education which is the foundation of quality education through the EdoBest programme which emphasises training and retraining of teachers.

According to the governor, Edo state was moving from schooling to learning using technology application to strengthening the quality of education.

Also speaking, the Vice-Chancellor, Prof. Lawrence Ezemonye, said the institution has become a selling point for other Nigeria universities globally.