Africa planted a total of 3.14 million hectares of biotech crops in 2018 — ISAAA report 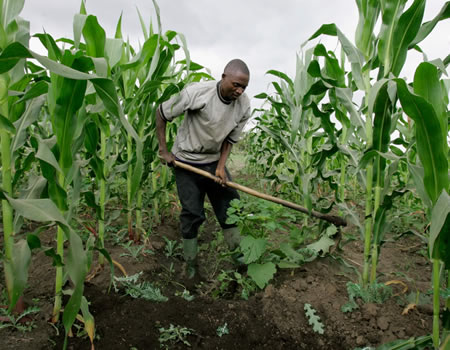 A total of 70 countries adopted biotech crops through cultivation and importation in 2018, the 23rd year of continuous biotech crop adoption.

This is according to the Global Status of Commercialized Biotech/GM Crops in 2018 (ISAAA Brief 54) released and launched today in Abuja by the International Service for the Acquisition of Agri-biotech Applications (ISAAA).

According to the report which was launched in Abuja, “twenty-six countries (21 developing and 5 industrialized countries) planted 191.7 million hectares of biotech crops, adding 1.9 million hectares to the record of plantings in 2017.”

The report shows Africa continues to make steady progress in the adoption of biotech crops with Nigeria becoming the first country in the world to approve biotech cowpea, thus, adding a new biotech crop to the global biotech basket.

The Kingdom of eSwatini (formerly Swaziland) joined South Africa and Sudan in planting biotech crops in Africa, with commercial planting of insect-resistant (IR) Bt cotton on the initial launch of 250 hectares.

The report further indicates that South Africa alone planted 2.73 million hectares of biotech crops in 2018 sustaining its ranking among the top 10 biotech crop countries in the last two decades.

“Most farmers in the country have adopted plant biotechnology with 87% adoption of biotech maize, 95% biotech soybean and 100% of biotech cotton. Sudan planted 243,000 hectares of Bt cotton, and a total of 3.14 million hectares of biotech crops in Africa”, the report says.

“The world is in a technological advancement trajectory. The green revolution that had taken the world by storm in the second half of the 20th Century is quickly transitioning into gene revolution.” Dr Karembu said.

“We are now progressing into genome editing, a more precise and accurate technology to effectively develop more productive, highly nutritious and climate-resilient crops for our rapidly-increasing population,” she added.

“In 2018, it was reported in the United Nation’s State of Food Security and Nutrition in the World that hunger is growing year after year for three consecutive years, and at the levels equivalent to the records a decade ago.

“Furthermore, the 2017 Global Report on Food Crises revealed that hunger and malnutrition continue to rise, with around 108 million individuals in 48 countries at risk or in severe food insecurity.

“Biotech crops, developed with improved traits such as increased yield, more resistance to pests, improved nutrition, among others, are undeniably necessary to address these global challenges affecting the lives of so many families globally”, the report added.

“While agricultural biotechnology is not the only key in enhancing global food security, it is an important scientific tool in the multi-disciplinary toolkit.” Dr Paul Teng, ISAAA Board Chair said.