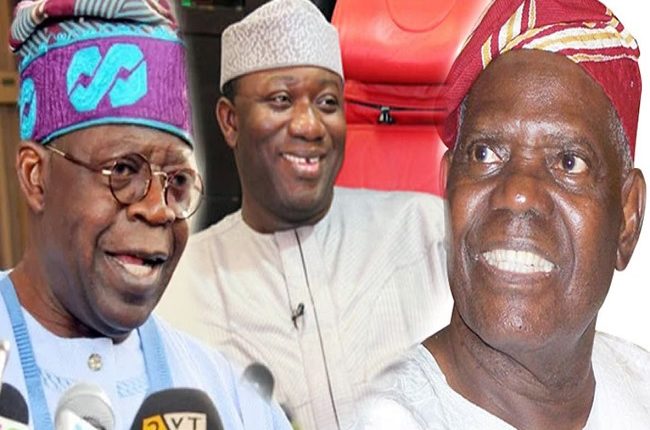 The Afenifere Renewal Group(ARG), has said prominent Yoruba leaders in the All Progressives Congress (APC) would be blamed if the southwest fails to clinch the presidential ticket of the party in 2023 due to unwarranted divisions.

The ARG said the APC National leader, Asiwaju Bola Ahmed Tinubu, party’s pioneer Chairman, Chief Bisi Akande and the Chairman, Nigeria’s Governor’s Forum, Dr Kayode Fayemi should deploy their strategic positions to unite the zone and clinch the presidential ticket that may likely be zoned to the South in APC.

The socio-cultural and political body also advocated for what it called “classical restructuring” of the country that would correct the highly entrenched lopsidedness in all zones and ethnic groups in phases.

Addressing journalists in Ado-Ekiti on at weekend, the ARG Publicity Secretary in Ekiti, Mr Michael Ogungbemi said with the impression that the APC may zone the presidency to the South after President Muhammadu Buhari two terms in office, the Southwest has the prospect of occupying the position and lead Nigeria to prosperity.

He said: “About 2023, ARG had met and we had concluded that the Yoruba nation is ready to lead Nigeria. We have a blueprint that we can present to any presidential candidate that can bring better democratic governance to all Nigerians.

“The southwest is ready to take over. We have human and material resources.

The political leaders must go on consultations. We have six geopolitical zones, Southwest is just a block. Tinubu must lead this block. Also, Luckily, Dr Kayode Fayemi, who is the NGF Chairman, is from the southwest.

“They must move for a united family to clamour for the presidency for the southwest and produce a unified front. If they can speak with one voice, we will actually clinch this ticket, because it is our turn.

“We can’t go into that race with a divided house. Tinubu, Fayemi, Akande, Chief Reuben Fasoranti, Gen. Alani Akinrinade, Professor Banji Akintoye, Senator Femi Okurounmu, Senator Ayo Fasanmi, Chief Afe Babalola, SAN and others must convey a meeting of the progressive politicians in the zone so that we can be United. If we have a candidate that is acceptable to both the North and the South, we will surely win.

“But Yoruba nation will blame Tinubu, Fayemi and Akande if the southwest fails to clinch the ticket,” he stated.

Speaking about restructuring, the ARG Chief told President Muhammadu Buhari that the country can’t run away from it, saying it remains the best panacea for peace and unity among diverse Nigerian citizens.

“Governance under the presidential system is very powerful and costly, but with power residing in the states and local governments, things will be better. We must have a roundtable referendum to achieve this. It is not to satisfy certain groups, it will bring geometric progressive order because we have not been moving at the right pace.”

On the proposed reopening of schools during COVID- 19, Ogungbemi appealed to the Federal government to fumigate all schools before reopening, in order not to endanger the lives of the children.

Buhari Calls For Africa Common Position On Asset Recovery
On the occasion of Africa Anti-Corruption Day, President Muhammadu Buhari has urged African leaders to ensure the immediate actualisation of the Common African Position on Assets Recovery (CAPAR), as the continent celebrates Anti-Corruption Day, July 11, 2020… Read Full Story
Tell Babalakin Not To Come To UNILAG, ASUU Asks Minister, NUC
The Academic Staff Union of Universities (ASUU), the University of Lagos (UNILAG) branch, Akoka, has asked the Minister of Education, Mr Adamu Adamu and the Executive Secretary of the National Universities Commission (NUC), Professor Abubakar Rasheed, to prevail on the Pro-Chancellor and Chairman of the… Read Full Story
Controversy Trails Wedding Of Malami’s Son As Guests Flout NCDC Guidelines
Controversy trailed the wedding Fatiha of the eldest son of the Attorney General of the Federation (AGF) and Minister of Justice, Abubakar Malami (SAN) held on Saturday in Kano state… Read Full Story
Lagos Govt To Enforce Demolition Of Distressed Buildings
Dr Idris Salako, Lagos State Commissioner for Physical Planning and Urban Development, says the state government will enforce the law on the demolition of distressed buildings… Read Full Story
Uneasy Calm: How Pupils, Students Are Getting Their Grooves Back After Three Months
THOUGH the Federal Government is dithering on the resumption of academic activities in schools across the country, the Oyo State government recently took a bold step and announced that academic activities would resume in schools, with the forerunners being pupils in primary six and secondary school students in JSS3 and… Read Full Story
Vice-President/Deputy Governor: Burden Of An Imperfect Constitution
STEPHEN GBADAMOSI looks at the problems caused by the phenomenon of deputy governor and vice president offices alongside the huge budgetary allocations to them and lack of clear-cut responsibilities… Read Full Story
COVID-19: US Breaks Own Daily Record With More Than 66,000 New Infections
The United States again broke its own record for new coronavirus cases in a single day, with over 66,600 fresh infections documented on Friday, according to latest data from Johns Hopkins University… Read Full Story
The Lies They Told About British Influence On Elections In Nigeria
I would advise people never to believe that rubbish from that former British colonial official, Harold Smith, that British rigged the 1959 general elections for the North to control Nigeria. It is a bunch of lies and disjointed attempt to ravish our country and her history. That man was a hired agent recruited to do that dirty job to… Read Full Story
FLICKERS: Magu, Maggots And Maga Dogs
AGAIN, the system felled Ibrahim Magu, Acting Chairman of the Economic and Financial Crimes Commission (EFCC) last week. It had always done that. Olusegun Obasanjo, the maiden president at inception of Nigeria’s fourth republic, first erected the crucifixion upon which a crime-fighting czar was hung… Read Full Story
BORDERLESS: NLC: Time To Pause And Ponder
IN its reaction to Federal Government’s announcement of the full deregulation of the downstream sector of the petroleum industry, the Nigeria Labour Congress (NLC) said it would mobilise its members against the move. Although the labour movement made some germane observations about the welfare of the populace… Read Full Story
VOICE OF COURAGE: Mago Mago Graft War
I have always maintained that only the pathetically ignorant and the deepest of the shallows will ever believe that Nigeria as is can fight corruption… Read Full Story