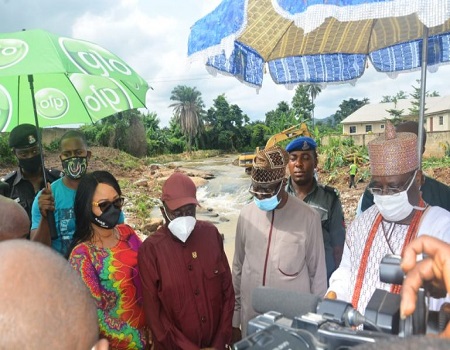 The prompt intervention of the legal Icon and founder of Afe Babalola University, Chief Afe Babalola (SAN), prevented some residents of Ado-Ekiti, the state capital from disrupting the construction of Ureje bridge along Ado-Ijan-Ikare road on Saturday.

The aggrieved residents, including drivers, Okada riders plying the route, market men and women and other road users had planned a protest for Saturday against the contractor over total closure of the road, which had cut off their means of livelihoods since the project began a week ago.

A section of the bridge had, last year, collapsed due to flooding, which also caused the death of a man while some property in the area were also damaged.

Addressing the contractor and residents of the Ureje area of Ado Ekiti metropolis at the bridge on Saturday, Babalola, who chided the Federal Government for starting the project late, urged the residents to endure the pains in the interest of the generality of the people.

Also present at the briefing were the Deputy Governor, Chief Bisi Egbeyemi and the Ewi of Ado Ekiti, Oba Rufus Adeyemo Adejugbe.

Babalola added that the project and the closure of Ado-Ijan-Ikare road had disrupted the day-to-day activities at Afe Babalola University (ABUAD) and the Federal Polytechnic, Ado Ekiti, among others. He also said that residents that were adversely affected by the closure.

He said: “This road was constructed over 90 years ago, it was a very narrow road. It is the only road that links Lagos to Lokoja and to Abuja. it was constructed by Royal Niger Company. But unfortunately, it has been neglected ever since.

“Since I started my university 11 years ago, I have been maintaining it. I have written several petitions to FG. I thought they would do their repair during dry season. Now, ABUAD community and many other areas of Ado Ekiti have been cut off.

“I expected that they would have done the repair earlier. There are two alternatives, it Is either they divide the bridge and let one section be used or the contractor should grade the road àt Igirigiri along Ado Local government as alternative route so that the people will not suffer.

“Some people came to report to me that they will disrupt this project and open up the road forcefully. But I beg the road users to endure this situation. But if the contractor fails to do the right, then we will take them up,” he stated.

Also speaking, the deputy governor, Chief Egbeyemi, directed the contractor to quickly provide an alternative road to prevent the people from venting their anger on them.

“I have interrogated them(contractor) and asked them to provide alternative road. They said they have identified Igirigiri road and I have instructed them to grade the road, this road can’t be blocked without alternative, because it is a major commercial route.”

The Federal Controller of Works in Ekiti, Engr Isiaq Lawal, said it was never the intention of the Federal Ministry of Works to inconvenience anybody, urging the populace to cooperate with them for the success of the project.

“A structure of this nature requires 28 days to get its strength and it is the national and international standard. We are pleading for understanding so that we can get out of the problem we are encountering. What will be the FG’s interest to inconvenience anyone?

“I met with Ekiti government to inform them before we started. We identified alternative road, but we are going to make it motorable, people should bear with us pending the time the bridge will be completed.”