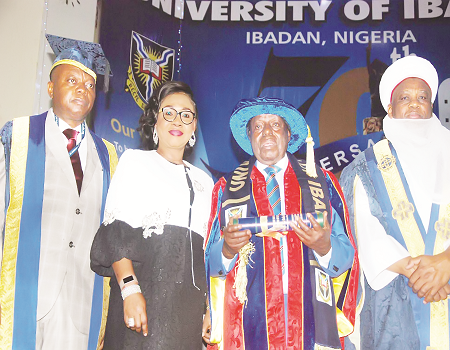 The Sultan of Sokoto, Alhaji Sa’ad Abubakar, Chancellor of the University of Ibadan, charged all and sundry to be committed to contributing their quota to ensure the creation of wealth, thereby enabling the government to meet its obligations

In his award acceptance speech, Afe Babalola argued that public universities in Nigeria will only be among the top universities in the world if made autonomous and free from government encumbrances.

The Vice-Chancellor of the university, Professor Idowu Olayinka, urged the Buhari -led administration to accord the UI special attention in form of special reconstruction and rehabilitation funds as well as increased allocation spread over a period of about 10years.

He vowed the resolve of the institution’s management to tackle its challenges in power supply, water supply and security through measures to include rehabilitation of pressure filter pipes at its water treatment plant, refurbishment of distribution transformers, procurement of safety equipment and provision of a streetlight at Appleton road.