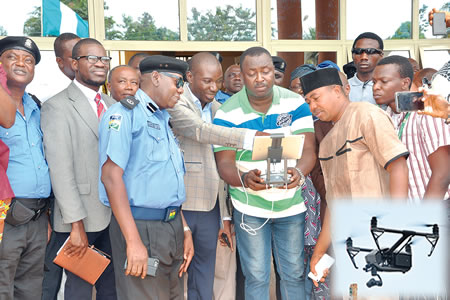 IN its efforts to enhance internal security and promote excellence in research activities, the Adeyemi College of Education, Ondo, on Friday launched a high-tech multipurpose drone.

The device, ‘Inspire 2’, was acquired through a partnership agreement entered by the college with Professor Victor Mbarika, founding executive director, International Centre for Information and Technology Development (ICITD), Southern University, Baton Rouge, Louisiana, USA, following a Memorandum of Understanding ( MoU) signed between the college and the university in November, 2017.

The state-of-art equipment which is fitted with the latest GPS technology, obstacle-avoidance and other sensors, as well as high capacity cameras, is capable of reaching up to 108 km/h (in speed) and altitude of 5,000 metres.

Speaking at the ceremony where the drone was demonstrated, the provost of the college, Professor Olukoya Ogen, expressed joy at the development saying the equipment was acquired to demonstrate the seriousness of  his administration towards ensuring safety of lives and property in the institution.

Professor Ogen used the opportunity to thank the facilitator of the drone acquisition, Professor Mbarika, for partnering with the college and donating 25 Apple brand computers worth several millions of naira for the use of staff and students of the college.

According to him, the drone will be used primarily for research.

“We can mount it on our own research farm to monitor the behaviours of insects and any other things. It is a multipurpose device; we are not using it entirely for security. It is simply because of the security situation in Nigeria that we decided to use it for security,” he said.

Earlier in his speech, Professor Mbarika described the provost as a visionary and good leader, and expressed optimism that the device would assist the college in tackling internal security and other activities that would promote effective learning.

Like candles, we light the way for others to see —Saint Isabel ex-students

Colleges education would have suffered terribly without TETFund-COEASU President