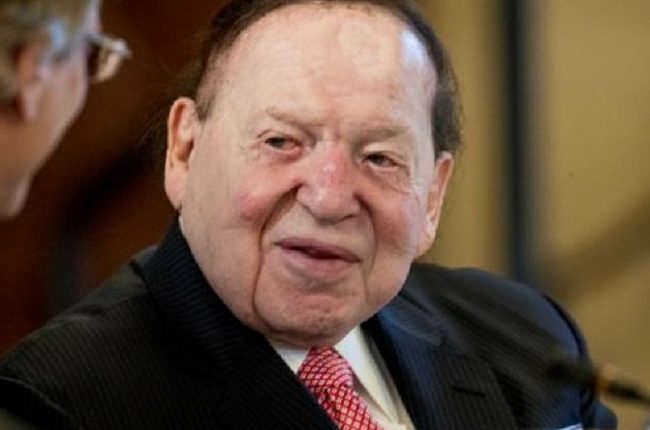 Sheldon Adelson, a casino magnate, perennial top single donor to Donald Trump and other Republican causes and an influential opponent of a two-state solution in the Middle East, has died, the Guardian of UK has reported. He was 87.

In a statement on Tuesday, his wife Dr Miriam Adelson said the Las Vegas Sands chairman and chief executive died “of complications from a long illness”. A Nevada newspaper Adelson owned reported the cause of death as non-Hodgkin’s lymphoma, which Adelson was found to have in 2019.

“It is with unbearable pain that I announce the death of my husband, Sheldon G Adelson,” Miriam Adelson said.

Adelson was born in 1933 and grew up in a suburb of Boston, his father a cab driver of Ukrainian Jewish and Lithuanian Jewish ancestry.

As the owner of the giant Venetian and Palazzo casino-resorts in Las Vegas, the Venetian Macau in China and the Marina Bay Sands in Singapore, he was among the richest men in the world, with a net worth pegged by Forbes at more than $33bn.

In the 2020 election, the Adelsons set a new record for political gifts from individuals, flooding the Trump campaign and related accounts, and many lesser Republican campaigns, with a total of $172.7m, according to the investigative campaign finance site Open Secrets.

The Adelsons were the top donors in every major election cycle going back a decade except for 2016, and their lifetime political giving amounted to about half a billion dollars, Open Secrets said.

In a statement on Tuesday, former president George W Bush said: “Laura and I mourn the passing of a friend.”

An enemy of union organizing inside his casinos, Adelson was a veteran of bruising negotiations with, and criticism from, union political machines in Las Vegas and elsewhere, a conflict seen as fueling his support for anti-union Republican politicians.

In 2015, as part of a wrongful dismissal suit brought by an employee, Adelson spent four days in court defending his gambling empire from accusations of bribery and ties to organised crime in China.

Initially skeptical of Trump, whom he knew as a failed casino entrepreneur, Adelson was slow to enter the 2016 election. Since the early 2000s, he had prioritized giving to candidates who opposed Palestinian statehood, and it was not initially clear where Trump stood on Israel.

But Adelson and Trump’s priorities connected in Trump family connections, through the president’s son-in-law Jared Kushner, to the Israeli prime minister, Benjamin Netanyahu, whom Adelson had long supported.

Adelson was adored across much of the political spectrum in Israel for his wide-ranging support to many Jewish and also Zionist organisations.

In particular, he was praised by hardline nationalists, in part due to his financial support for Jewish settlements in the occupied Palestinian territories, which are considered illegal by most world powers. One medical school in a settlement in the occupied West Bank is named after the Adelsons.

The billionaire’s death was mourned by several far-right Israeli politicians, including Naftali Bennett, a former defense minister, who said Adelson would be “forever be recorded in the annals in the State of Israel”.

Local media reported Adelson’s funeral would be held in Israel.

We joined IPPIS in error, we are now poorer than before, ATBU SSANU, NASU laments