Adekunle Fajuyi and the politics of remembrance 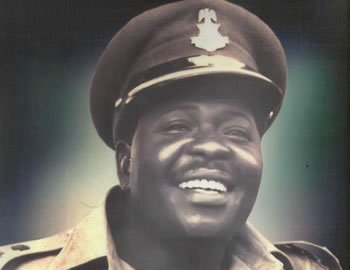 These are the virtues that have seen us through the turbulent upheavals of the past; they are the sure path to our ability to survive – and thrive – in the future.We are celebrating a Yoruba man who chose to go down with his guest and Commander-in-Chief who was Igbo, a true leader who saw office as service, who regarded the entire country as his political and moral constituency. A man so proud to be Yoruba yet so proud to be something more than, something beyond, that. We remember him well when and if we keep his enlightened, ecumenical spirit in focus, this man who placed such vital premium on loyalty and integrity, this man who taught us all a new way of being human.

The Road to Lalupon (seven hearty cheers to the authors of that title and its touchinglypolysemicevocation!) is still long and snared, its palm trees pock-marked by the bullets of the mutineers of an unstable polity, the green leaves still droop with the blood of akoniogun(brave warrior); the wind is still astir with the mad music of the gun. And there are still big questions begging for answers: is Lalupon a little comma in the sentence of our national discourse? Is it a terminus or astarting point; a cardinal spot or mere stop-over on our maplesssearch for nationhood?Is it a theatre or a temple, a well paved path or a thorn-benighted crossroads?  Whatever the answer may be, from Ado Ekiti to Laluponis, no doubt, a fateful distance. From the heroic sacrifice of a long-gone Akikanju to the monstrous sacrilege of contemporary moral cretins, a long insufferably disturbing stretch. Once there was a soldier; now we are saddled with cannibalistically corrupt mercenaries in military uniform. The incomparable Fajuyi must be wincing in his grave today.

Yes, were Nigeria a nation, the likes of Fajuyi would have their statues in every state capital in the country. But Nigeria is not yet a nation, not even a country if by thatwe mean an organized, coherent entitywith mutually respecting parts bound by a set of identifiable (positive) values. Omoluabi Adekunle Fajuyi lived for that dream. It was for its sake he gave his life. His dream challenges our despair; his idealism upbraids the crass ordinariness of our leap of faith. We owe this great man a memory unencumbered bypetty  politics; a remembrance beyond the strictures of tongue and tribe.

I thank the Think Tank of the Association of Yoruba Professionals (EgbeMajeobaje), EgbeMajeagbagbe) for inviting me to deliver this lecture; for making sure we do not forget. I thank you all for listening.

Kwara governor pledges not to be vindictive

Why experience is vital in politics — Olumilua

2019: The three-horse battle for Taraba