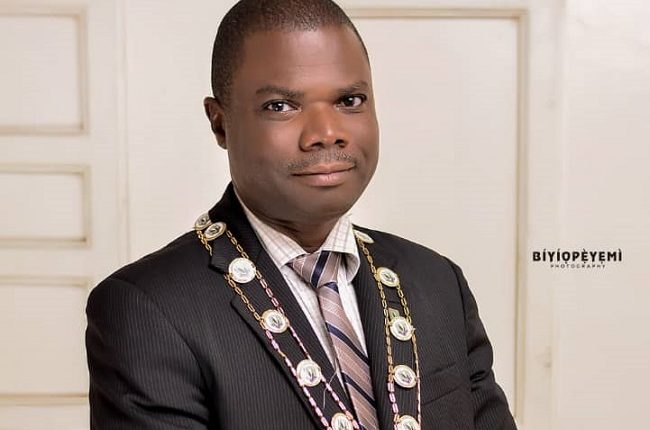 Dr Adesoji Adedokun has been invested as the 10th Chairman of the Chartered Institute of Taxation of Nigeria (CITN) Ibadan and District Society.

Adedokun received the baton of leadership from Mrs Clara Yemi-Oke, who is the immediate past Chairman, at an investiture and inauguration ceremony held at Jogor Centre, Ibadan.

Prior his emergence as Chairman in an election held on November 16, 2019, Adedokun had served as Vice Chairman in the immediate past cabinet.

Speaking for the newly inaugurated executive council, Adedokun promised to give attention to increasing the visibility of CITN in the nation space and working to acquire land for the district to have its own permanent office.

He added that his administration will also work towards the establishment of liaison offices at the variously identified subunits of government like the office of the accountant general and state Board of Internal Revenue.

While assuring of getting more members involved in the activities of the district, Adedokun called for collective effort, invaluable support, cooperation and unwavering of all members for the administration to achieve its set goals.

Delivering the investiture lecture, Dr Oyefemi Oyetunji of The Polytechnic, Ibadan, pointed to the instrumentality of taxation as a tool for poverty reduction and sustainable development.

Expatiating his stance, he noted that Oyo state needed to adopted new progressive taxes to generate revenue for anti-poverty programmes.

According to Oyetunji, some progressive taxes that should be adopted are taxes on high-income earners, state estate taxation, tax on companies with extreme gaps between Chief Executive Officers and their workers, high-end real estate taxes and carried interest tax.

Such taxes, he noted, will help the state tackle inequality, child and family poverty, aged poverty, working-age poverty.
He particularly tasked the CITN to particularly engage relevant committees of the Oyo state house of Assembly towards enacting appropriate laws that would engender sustainable development in the state through the instrumentality of taxation.

In his remarks, Chairman of the occasion, Mr Sarafadeen Alli harped on the need for federal and state governments to allow local governments access revenue if poverty is to be reduced in the society.

Alli, a former Secretary to the Oyo State government, stressed that people at the grassroots can only feel the impact of government if local government areas have funds and are granted liberty to play their constitutional roles.