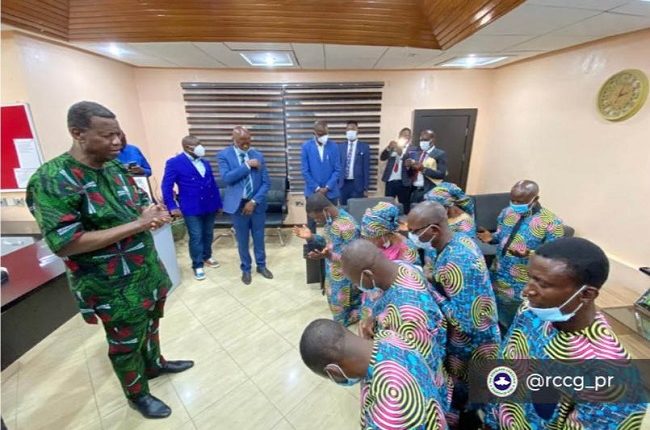 The General Overseer of the Redeemed Christian Church of God (RCCG), Pastor Enoch Adeboye, has identified and also paid an unscheduled visit to the freed kidnapped members of the church in Kaduna State.

The notable cleric with top official members of the church earlier on Wednesday visited the members that were abducted on their way to the venue of the Let’s Go A Fishing programme recently.

Adeboye expressed his delight that all the kidnapped members were released unharmed, adding that, “To the glory of God, they are hale and hearty. I also laid hands on my children who were sick.”

He also prayed for the eight members that were reportedly released on April 8 after barely two weeks in captivity. They were travelling in a church bus on a mission journey in preparation for the annual RCCG Easter programme.

Tribune Online also gathered that the cleric visited Governor Malam Nasir Elrufai at the state house in Kaduna, just as he prayed for the state, its people, and its leadership for peace and protection of the state.

“It is my prayer that the peace of and the Kingdom of God will be established in Kaduna State and our nation Nigeria and all locations where the children of God are across the world in JESUS name. Amen.”