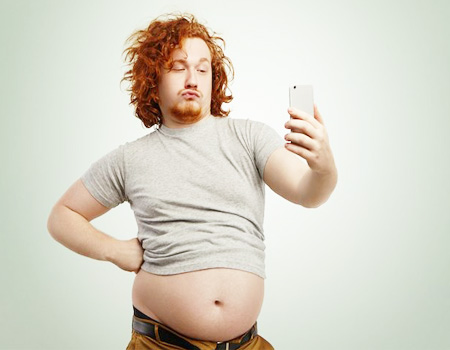 REPORTING on the study by Janarthanan Balakrishna and Mark Griffiths published in the International Journal of Mental Health and Addiction, the press is quick to feed current moral panics on epidemics of narcissism and low self-confidence among today’s youth. But what do scientists actually say?

Six items on the selfitis scale
While the press has largely focused on low self-confidence as a key predictor of selfie-taking, the researchers identified six factors which, in order of importance, drive the urge to share self-portraits on social media. The first one is what they term Environment Enhancement, linked to the idea that taking a selfie will help us retain a better memory of an experience. Next comes Social Competition, or the urge to appear better than others, followed by attention seeking, mood modification, the desire to improve self-confidence, and subjective conformity. Low self-confidence, thus, was reported as the second least important factor by the study’s 400 participants, who were all university students in Madurai, India – a country chosen as the study’s main site for boasting the world’s highest Facebook use and the highest numbers of selfie-related accidents and deaths.

Is the study valid?

While the authors’ results are statistically sound, presenting selfies as a mental illness that only target certain individuals is short-sighted. Rather, the practice should be understood as a social phenomenon pertaining to our time. Selfies should also be understood in light of cognitive and compulsive mechanisms rooted in human evolution. The propensity for patterned behaviour that gives rise to cultural norms, meaning, standards of behaviours and daily routines makes us uniquely prone to addictions, but some experiences are more addictive than others. Fat and sugar, for example, are precious sources of energy that were rare and difficult to obtain in the environment in which we evolved. We have developed special cravings for these substances, which makes them uniquely hard to resist in modern worlds of abundance. Current epidemics of obesity, diabetes and heart disease can largely be blamed on these evolved cravings. So if selfies and social media are like fat and sugar, why are they so addictive?
We should remember that as humans, we are a fundamentally social species. Social competition is not simply the desire to be better than others, but to compare ourselves to others. It is through social comparison that we derive a guide for behaviour, but also meaning, goals, and a sense of Self. Social comparison also gives rise to mechanisms and rituals for self-monitoring. Social life, in other words, affords the necessary compulsion to be seen, monitored, valued, and judged by others, and in turn to watch, monitor and judge others according to the standards of our culture.

The “problem” with social media and selfie culture, thus, is simply a matter of scale and quality of experience. When humans interact online through the abstraction of images, the illusion of speed and hyper-connection is trumped by a disembodied feeling devoid of other sensory rewards. This makes us crave more, not less ‘connections’ and validations from others, which in turn produces compulsions that run in overdrive. To recap, then, taking and sharing selfies is not so much a rare, pathological and selfish behaviour as a fundamentally normal, social activity produced for and in relation to others.

The question of sex and gender

The study’s findings reported from India may not be readily applicable to all cultures. Interestingly, in the Indian sample, men appeared to share selfies more frequently than female gender (57.5 % against 42.% of participants).

According to Psychologytoday, recent studies from western contexts seem to indicate that women (social gender roles) are much more prone to take and share Selfies than men. But reviewing cross-cultural evidence, psychologists have also found that on average, females (biological sex) perform higher than males in social intelligence and pro-social behaviour, which would appear to make them more vulnerable to social media addiction. Women (social gender roles) in the India sample from the Selfitis study reported spending as much time as men on social media, but shared less selfies.

In India, social norms imposing specific regulations on women’s behaviour in the public sphere may thus be reflected in Selfie-related behaviour. Whatever its causes, this interesting finding supports my main argument about human behaviour online: the internet is a social space that is not immune to universal features of human psychology and the specific expectations of our cultures.

Before pointing the finger at a few overeager individuals or specific behaviours that seem abnormal, thus, we should remember the fat and sugar stories, and examine how our evolved psychology, in relation with changing times and cultural norms, makes us more prone to some compulsion than others.

Police nab 7 for sale of naira notes in Onitsha