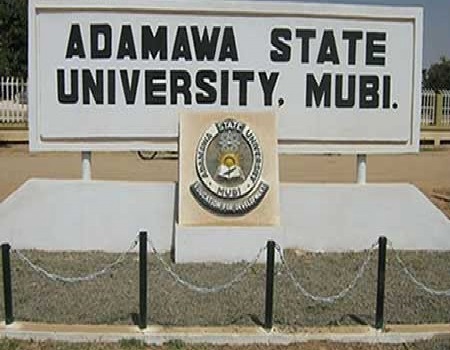 Students of Adamawa State University (ADSU), Mubi, have called for more funding and recruitment of additional lecturers for the state-owned institution to recover from its numerous challenges.

Representatives of the university’s Students’ Union Government (SUG) made the call Wednesday in Mubi while briefing newsmen on their maiden meeting with members of the newly appointed Governing Council of the institution.

“It was a fruitful discussion and we told them the challenges facing students; we spoke on the need for more funding of the university by this new administration of Gov. Ahmadu Fintiri who has shown interest in restoring the glory of this institution, which is the first state-owned University in North East.

“We spoke on the need to increase the number of lecturers and suggested retaining of best graduating students from all departments as one way to address that,” said Tizhe Geoffrey, the Secretary-General of the SUG.

Also speaking on the meeting between the council and the Academic Staff Union of Universities (ASUU), the branch chairman of ASUU, Mr Abubakar Aliyu, said the Academic staff also presented to the council their problems,  challenges and way forward.

“You know the University has been operating for years without stable councils, so this new council is coming to meet a lot of challenges.

“We drew their attention to the challenges they are likely to face and the expediency to address these challenges for the University to move forward.

“We want the council to expedite the constitution of management so that we can have a substantive Vice-Chancellor,” Aliyu said.

He also spoke on the need to beef up security in the campus and the town, pointing out that Mubi was one of the areas that suffered adversely from Boko-haram insurgency.

The ASUU chairman, however, lauded the stability in the University in spite of the numerous challenges.

“We have stability and have been running our calendar and graduating students,” Aliyu said.

The News Agency of Nigeria (NAN) reports that members of the Governing Council, led by the  Chairman,  Alhaji Auwal Tukur, were at the institution for its inaugural meeting and interactive sessions with stakeholders.