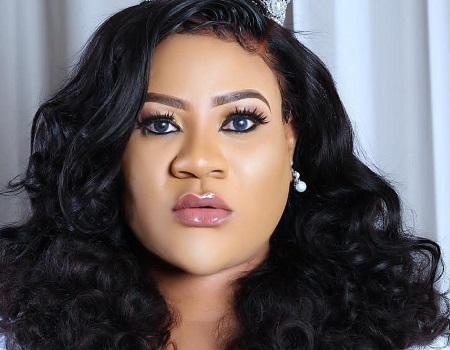 Fast-rising Nollywood actresses, Nkechi Blessing who’s currently in the United States of America for the premiere of her latest movie, ‘Torera’ has finally revealed her long-time anonymous lover, Michael and revealed how she met her boyfriend, Mike Adeyemi, also known as Razor Ray who is also an actor but based in the United States.

In what seems to be like a flow of love in the air, the love birds on a live video chat with their followers on Instagram explained how they met each other.

According to the beautiful actress, their relationship started as ‘Love at first sight.’ This revelation came after a fan asked on the live video if it was her boyfriend, who was at the background.

She, however, replied by saying, “Whose else’s boyfriend does he look like?”. Having confirmed it was her boyfriend, another follower then asked how they met.

Mike Adeyemi, her boyfriend, making it look like storytime, showed up on the live video explaining how they both met and how much he had missed Nkechi Blessing so much because, according to him, the last time he saw her was in 2018.

Explaining how they met, Razor Ray said they both met on set of his first-ever movie, ‘Bad Market, ‘ which had Nkechi Blessing on set. “We saw first the first time when we went to pick her up at the train station, and it was just loved at first sight.

“In the movie, we kissed, ‘a jete,’ and that was how it all started. I have missed her so much. The last time I saw her was in 2018 and glad to be seeing her again,” he said.

Ojayy Wright kicks off 2020 with 37 Degrees in Lagos E.P project