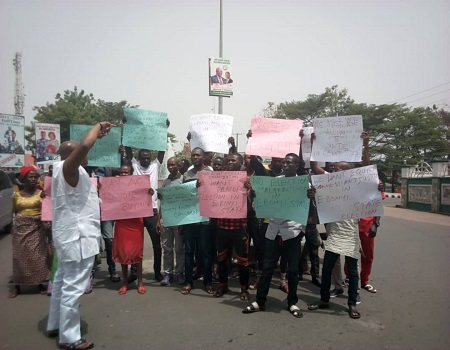 Share
Less than 12hrs for the commencement of the Presidential Election in every part of Nigeria, a Human Rights Advocacy Organization, called for a violence-free election in Ebonyi state.
Addressing the group, when visited  Ebonyi state  Government House Abakaliki, the Chief of Staff, applauded the group for taking the bold step to sensitised the people on the need to Shun all form or violence during and after the election.
He then assured the group that he will take their message to the governor, adding that the state government will ensure the conduct of a free and fair election in Ebonyi just as they advocated for.
He reiterated that the government will protect them during the election despite their tribe and religion while applauding them for their efforts.
He urged them to vote for a leader that has the interest of the people at heart and as a human right organization, they should stand on their rights.

Meanwhile, the founder of the group, Mrs Nwakaego Jacinta Nworie said: “We say no to election violence, we say no to election malpractice. This is not a political gathering, but a gathering that allows people to follow their conscience.
“Our mandate is to defend peoples rights, people should follow their minds, we took time to visit the 13LGAs of Ebonyi state to get peoples opinions about the present government. And we where told that this government has done well and deserves some kudos”.
activistsEbonyi
Share

INEC yet to commence distribution of election materials in Taraba