Entertainment
By Rukiyat Bakare On Feb 16, 2021 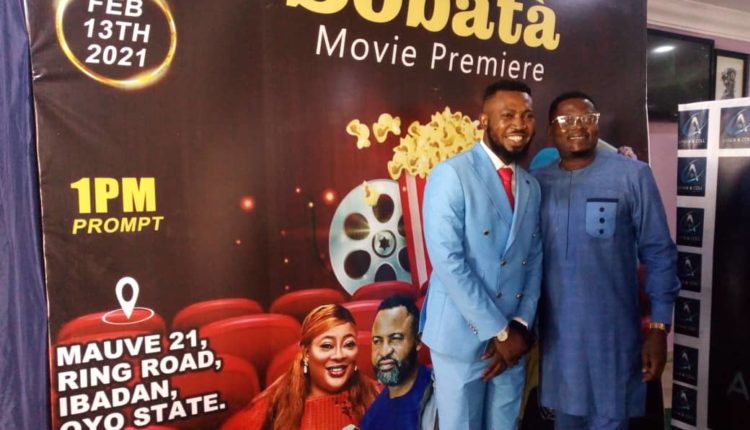 The official premiere of the movie titled Sobata ,which made round on social media was spotlighted on Saturday at Mauve 21 Event center , Ibadan, the Oyo state capital.

The movie Sobata , meaning cobbler is produced by Olayinka Adekunle and directed by Adesina Abiola Paul.

The producer, Olayinka Adekunle, hinted that the movie spotlighted the struggle of an unemployed graduate who became a cobbler after a long search for a white collar job , adding that it was his life story .

He said”, the movie ,”Sobata” ,is my story , and that is the reason all credit to my creator ,he is the executive producer of this movie.

“Sobata has been my day ,my night ,my hour, minutes and seconds. Bringing Sobata movie to screen is a big dream come true for me”,he added.

Adekunle, also added that the movie also delved into one of the secret of life which according to him is about having control over emotions.

Also speaking at the event,the director, Adeshina Abiola Paul, explained that he was inspired to accept to direct the movie having thought of the journey of life of a person born without a silver spoon and his determination to succeed in life.

Speaking at the event, popular actor and one of the cast in the movie, Muyiwa Ademola, disclosed that the movie involves lots of enforcement, emotional moments, and lessons for people to learn.

He however urged all employed or unemployed youths to imbibe the culture of being a sole proprietor which according to him is one of the lessons learnt from the movie.