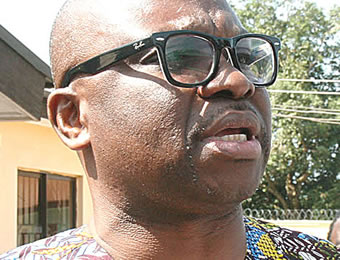 The two private accounts of Ekiti state governor, Mr Ayo Fayose, with Zenith Bank, frozen since June, 2016 by the Economic and Financial Crimes Commission (EFCC) will remain embargoed until November.

This is following a ruling on the case filed by Governor Fayose against the EFCC, against the freezing of the accounts at the Federal High Court sitting in Ado Ekiti, on Friday.

Presiding judge, Justice Taiwo Taiwo, adjourned till the said date after both Fayose’s lead counsel, Chief Mike Ozehkome (SAN) and that of the EFCC, Mr. Rotimi Oyedepo, had both agreed on a definite adjournment.

At the resumed hearing, Fayose’s lead counsel, who led 10 other lawyers in defence of the governor, told the court that EFCC lacked the constitutional powers to so apply punitive measures on a governor that still enjoyed immunity until the end of his tenure in 2018.

He argued that freezing of the governor’s accounts, based on what he said was “mere hearsay and unsubstantiated allegations of fraud”, lacked the backing of the law.

He argued that only a declarative evidence of court of competent jurisdiction could act in the way the EFCC did, saying blocking the governor’s accounts without being found guilty by courts of the land, amounted to convicting the governor before putting him on trial.

But in a reaction, EFCC lead counsel, Mr. Rotimi Oyedepo insisted before the court that the decision of the anti- graft agency to freeze Fayose’s accounts followed due process.

He pleaded with the court to give him enough time to study the counter argument of Fayose’s lead counsel which was presented to the court for more than three hours.

Why I asked for my mum’s prayers before ending my performance —Okeimute, winner Project Fame Season 9