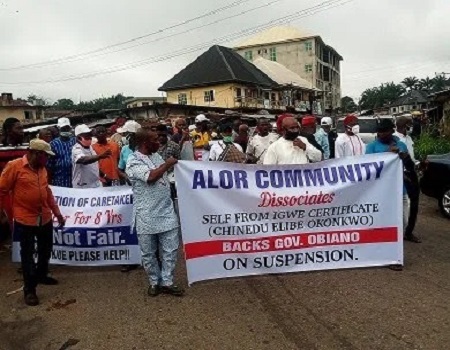 Dr. Chris Ngige, the Minister of Labour and Employment, on Saturday led a protest against alleged imposition of the traditional ruler of his Alor country home in Idemili South local government of Anambra State, Igwe MacAnthony Okonkwo.

Nigerian Tribune gathered that Igwe Okonkwo is one of the traditional rulers recently suspended by the State Governor, Willie Obiano for travelling to Abuja to visit President Muhammadu Buhari without Traditional due process.

The protesters numbering over 500 indigenes took to the streets with placards with various inscriptions against alleged imposition of monarch and Caretaker Committee in the community by the State government.

Some of the placards read: ‘Alor rejects the imposition of caretaker, please, Governor Obiano look into this matter’; ‘this imposition has been on for eight years’ and ‘we dissociate our community from the monarch who travelled to Abuja without permission from our government” among others.

Ngige, a former Governor, who hails from the community, called Obiano to suspend the 12 traditional rulers and banish them from their different communities for desecrating the culture and traditions of their lands.

Ngige alleged the traditional ruler was imposed by former Governor Peter Obi to punish his community and local government for voting against their allied forces in the 2011 senatorial election when he contested on the platform of the Action Congress of Nigeria (ACN).

He said: “He decided to punish the towns thereby starving them of any projects and destabilise their town unions starting from Alor where he dissolved the executives with a caretaker hostile to Ngige and imposed the monarch on the community as against the Constitution of the people ”

“When someone is suspended from performing functions of an office, he should be barred from even being in that vicinity.

“So, I advise Anambra State Government to relocate these 12 traditional rulers from their Communities to avoid a situation likely to cause a breach of public peace.”

The Minister further alleged the Monarch of Alor was never enthroned but imposed on the people as a vendetta by the Obi administration for using what it called small Yoruba party ACN to defeat them.

The President General PG of the community, Chief Uzoma Igbonwa, said the community would continue to support Governor Obiano’s administration, adding that Alor would never work against the state government.

According to him: “We plead with the State Government to dissolve and disband the said caretaker Committee of Alor People’s Convention for working against the interest of Alor people and government of the State because their continued existence is an impediment to the peace and progress of Alor Community.”

In response, the traditional ruler, Igwe MacAnthony Okonkwo, denied the allegation he was imposed by former Governor Obi.

He insisted he was the monarch of Alor community and nobody would remove him.

After his one-year suspension by Obiano for allegedly going to Abuja without authorisation, he openly apologised for violating certain rules guiding the operation of monarchs in the state.

So. What other apology did they want again, he asked.

CBN Pegs Exchange Rate At 386/$
Central Bank of Nigeria (CBN) has pegged naira exchange rate at 386 units to the United States dollar as it plans to resume weekly forex sales to Bureau de Change operators from August 31. In a circular signed by O.S. Nnaji, director of trade and exchange department, the apex bank said its decision to resume FX sales to BDCs is to enhance accessibility to forex “particularly to travellers” since the resumption date for international…Ngige leads protest

Blasphemy: I Will Not Hesitate To Sign Death Warrant If Yahya Sharif Fails To Appeal, Says Ganduje
Kano State governor, Abdullahi Umar Ganduje, has said he would not hesitate to sign the death warrant passed on Kano-based singer, Yahya Aminu Sharif if he fails to appeal the judgment. This was just as governor Ganduje said the state government has accepted the judgement passed on Sharif and is ready to abide by it. However, the Nigerian constitution gives the right of appeal to Shariff…Ngige leads protest Ngige leads protest

Buhari: It makes no sense to sell petrol below Saudi’s N168/per litre