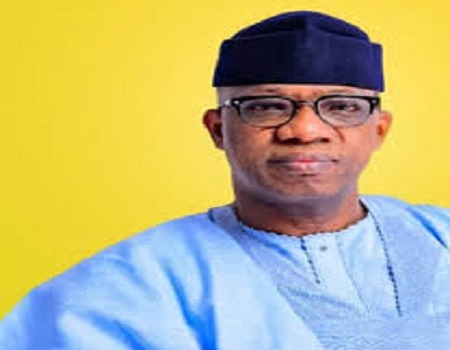 Share
The Ogun State Governor, Prince Dapo Abiodun, on Friday, said the proposed year 2020 budget will be a springboard for the implementation of its administration’s economic development plan to create wealth and re-position the economic well-being of the people.
Abiodun stated this at a sensitisation programme by the Ministry of Budget and Planning to enlighten stakeholders across Ministries, Departments and Agencies (MDAs) on the vision of his administration towards the preparation of year 2020 Budget.
The Governor said his administration was already undertaking necessary amendments on the Security Trust Fund,  a  new bill to establish Public Works Agency,  the Public-Private Partnership ( PPP) and Ogun Invest Promotion bills among others to accelerate the economic and developmental plan of the State.
Abiodun said the amendment bill already transmitted to the House of Assembly would ensure that the State becomes safer and conducive for investors and investments through the provision of state-of-the-art security gadgets and equipment for security agencies in the State.
He added that similar synergy was already being planned to tighten security in South West States through a joint task force to be put in place by the governments of Ogun,Lagos, Oyo, Osun, Ondo and Ekiti States to address increasing security unrests pervading the zone in recent times.
On road Infrastructure, he said the attention of his administration would be shifted to developing township and rural roads to stimulate the local economy, noting that efforts were also on top gear to initiate a bill that will establish the Public Works Agency in order for local technicians and professions in the building sector to create wealth for themselves as government was ready to employ people living within the corridors of the roads to be constructed to work on such projects.
He said “The proposed Public Works Agency to be established through a new bill will stimulate the local economy through employment of people living in those corridors. Gone are the days we’ll employ foreigners to undertake road constructions.”
The Governor also hinted on his administration readiness to engage more youths and provide food security through agriculture, saying no fewer than 10,000 youths would be engaged in a partnership programme between the federal government and the State, through the Central Bank of Nigeria. whereby hectare of land would be made available to each of them for agricultural purposes.
Abiodun noted that while the CBN would assist in clearing the land, provide seedlings, the State government would render extensions services just as the CBN would ensure buy back mechanism.

On his part, the Chief Economic Adviser to the Governor, Mr Dapo Okubadejo said the state government had mapped out an infrastructural development plan to highlight the commitment and role of all stakeholders towards funding it projects.
Okubadejo said the plan had spelt out what would be spent by the State government, donor agencies and amount accruable from Federation Accounts and Internally generated revenue towards financing it’s projects while the deficit would be sorted through a bond programme.
He said further that the State presently does not have a credit rating in the capital market , but assured that the present administration was working towards ensuring that the state have a good stead at the capital market to access funds by ensuring discipline in terms of itsfiscal policies.
The Permanent Secretary, Ministry of Budget and Planning, Mr Hassan Adekunle while appraising the mid-year budget for 2019 said ” expenditure performance as at June 2019 stood at N85.90b which represents 21.46% of the total Budget of N400.32.
Adekunle said the performance of 42.92% of N200.16b which indicated an increase in expenditure by 5.72% compared to the actual expenditure for the corresponding period of 2018.