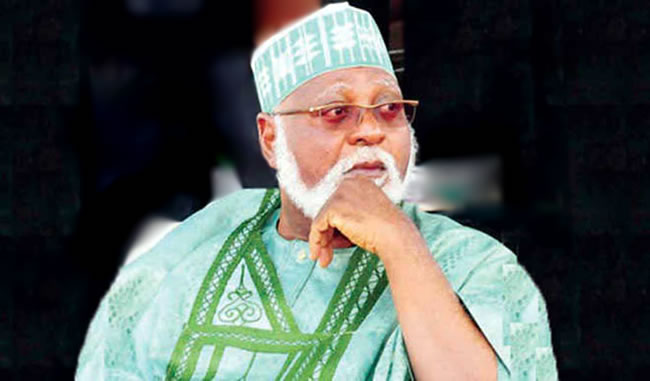 Tight security was sighted at the International Airport, Minna on Saturday with heavily armed security personnel present when former military Head of State, General Abdulsalami Alhaji  Abubakar returned to the country after about three months in the United Kingdom for medical reasons.

Tribune Online gathered that the security build-up at the airport began on late on Friday when the entire airport was cordoned off by security personnel in anticipation of the arrival of the former Nigerian leader and elder statesman in the country, after which it was later slated for Saturday morning.

It was further learnt that as early 7:00 am on Saturday, the stern-looking security operatives returned to their duty post at the airport, and ordered everybody out of the airport as they took strategic positions near the tarmac and at the arrival lounge of the airport

Tribune Online further gathered that asides a few vehicles suspected to have taken some close family members and associates, nobody including journalists were allowed into the airport premises as security personnel told everyone present that “nobody is allowed to go in please”.

At precisely 9:33 am a Nigeria Air Force Aircraft marked No. 5NFGV conveying the former head of state and 12 others touched down at the Minna International airport.

Among those on board the aeroplane with him were his wife, Hajiya Fati Lami Abubakar, his daughter and wife of the state governor, Dr Amina Abubakar Bello as well as other close family members.

Further checks revealed that contrary to the rumours making the rounds of his deteriorating health condition, Tribune Online learnt that the former Nigerian leader was looking hale and hearty and in high spirits.

He was driven straight to his Up-Hill country home in Minna at about 9:58 am after a brief exchange of pleasantries with few family members who were on hand to welcome him back home to the country.

It could, however, be recalled that the former head of state departed the country for the United Kingdom sometime in June this year for medical treatment abroad while his health status had been a subject of discussion and concern to citizens especially in Niger State.