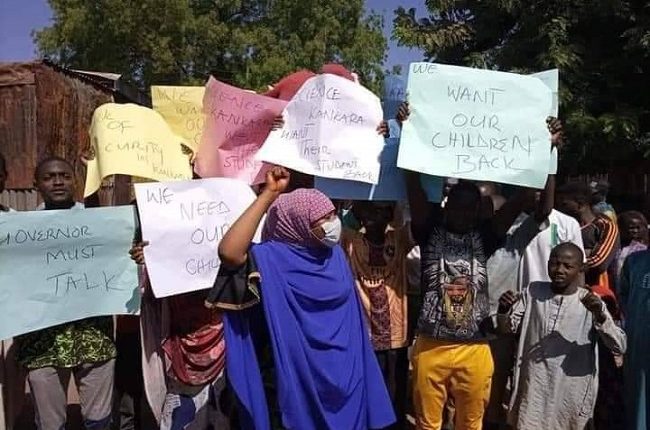 The protesters in their hundreds stormed the streets calling on the Federal Government to bring back their children without delay.

It was led by a woman protester, Hajiya Ikilima Usman, believed to be a parent whose son, a JSS 2 student, was among those kidnapped.

Sources said the protesters stormed around the school’s premises and some parts of the town with placards conveying various messages.

Among the messages are ‘Government must speak out’, ‘We want our children back’ and ‘We want security in Kankara’, ‘Bring back our boys’ among others.

As at the time of filing this report, normalcy had returned to the town. It was gathered that soldiers and police have been deployed to Kankara as most residents have fled.

However, one of the parents, Murtala Hamza told Tribune Online that they will not rest until their children are rescued.

He said, ”Most of us cannot sleep since we don’t know the condition of our children.”

Hamza also called on the state and Federal Government to act urgently so that the parents can have peace of mind.