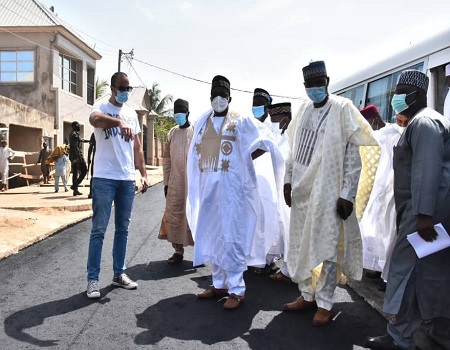 Residents of the Federal low-cost housing estate and railway as well as other areas along the dreaded CBN roundabout – Federal low cost – Railway Road in Bauchi metropolis will have cause to celebrate following the assurance that the road abandoned for several years will be completed and commissioned in the next 3 months.

The assurance was given by the Bauchi State Governor, Senator Bala Abdulkadir Mohammed when paid an unscheduled visit to inspect some ongoing projects in the areas saying that the road project was rewarded to Triacta Company because of its capacity towards delivering qualitative works.

The governor who expressed satisfaction with the quality of the coal tar laid on the surface of the road said that the company has already pledged to complete the project in the next three months.

He assured the good people of the state of the readiness and determination of his administration to continue with the execution of the abandoned roads project across the state in fulfilment of his campaign promises.

According to him, currently, the state government is in touch with the contractor handling the road project from Awalah to Miri dual carriage to ensure its completion according to the contract specifications.

He also said that in order to make a difference in the award of contracts, his administration is paying the required funds for such projects in an efforts to ensure timely completion and delivery by the contractors.

The Governor also assured of regular supervision of the projects so as to ensure its completion at the expected period.

The contracting company, Triacta through Mr Michael Treshafa who received and briefed the governor at the projects site, pledged to complete the project soon and in accordance with the terms of the contract.

The Commissioner for Works and Transport, Abdulkadir Ibrahim had earlier said that because of his zeal for infrastructural development and to overcome the challenges faced by the affected communities, Governor Bala Abdulkadir Mohammed re-awarded the roads project contract which the immediate past administration failed to deliver.

Food security: I am going back to land, Bauchi gov declares