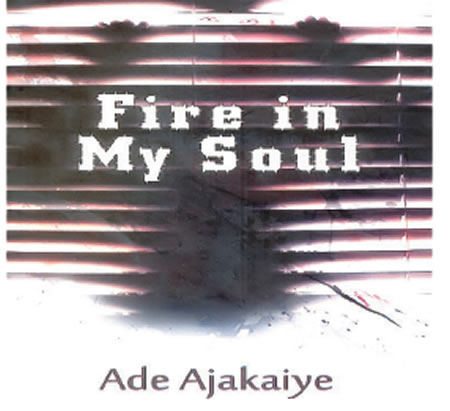 WAR’ is the best word to describe the African existence. This is the reality of the African people.

History bears witness to this assertion; starting from pre-colonial, colonial to post-colonial era, Africans have always been fighting, if not against one another, then against others, or the societal systems. That’s the reason I usually refer to African literature as that of combative literary output.

Ade Ajakaiye’s Fire in My Soul, as a collection of poetry, covers thematic concerns that focus on the existence of being in the new African society as regards the socio-political, economic, religious and cultural aspects of life.

One has to be very careful with the ironical description of the new African society in Ajakaiye’s reflections in his poetry collection.

The writer is a reckoning voice for the weak, poor and oppressed in the new African society.

Ajakaye’s thematic concern runs through all historical periods and political system in African society. His setting is timeless.

In his poem, Africa,

“Africa emerged bruised/Manacled and shackled/Thirsty for freedom/Hungry for progress,” the poet reflects Africans quest for freedom from oppression at all times.

Africa, from the post-colonial lens, is an oppressed society. From the shackles of colonialism by the White man and the struggle with neo-colonialism from the hands of its people, Africa has been in bondage.

In his poem, The Nigerian, Ajakaiye lightly reflects the colonial nature in Nigerians: He writes: Surivive a crash/All Inch from death/But when he came to/Asked for his crown/And heavy gold ring.

This stanza reflects the nature of colonialism and the quest for independence.

The other stanzas are reflections of the state of hopelessness in all machineries established for the existence of the newly-liberated society.

Feminism is another fight against power structures built in a similar way that Ajakaiye reflects on in the seventh stanza of the poem entitled, Happiest people:

This is a lamentation of the state of one’s freedom, as one is only free to one-self.

Religion, as an oppressive tool, serves many sides — the good, the bad and the ugly. The poet, therefore, laments the ills, wickedness and callousness people do in the name of God.

Ajakaiye focuses on the differences that exist between godliness and religiousness in his poem, Fire in My Soul. He expresses his annoyance to the decaying values in religion in the hand of men.

In the first stanza of The New Gospel, He writes:

This lamentation about the commercialisation of religion in modern African society is satirically expressed by the poet as against the moral sense of spirituality, which the poet believes in.

The poet expresses this in the 12th stanza of We Roast: “They roast in the churches/Synagogues and mosques/As charlatans prank and lie/To their sheepish folks.”

This reflects his total condemnation of what people do in the house(s) of God, irrespective of religion.

It is purely seen in the poem, The Way, where the poet’s sense of hope in God is expressed in the last stanza: Those who know/That God is There/In everything he made/Noble and raw/Feel His Sparks/In all they Touch/Walking His way/Will.

The native of Oka-Akoko, Ondo State, is also a philosopher and public affairs commentator.

How Oyo is making gain of COVID-19