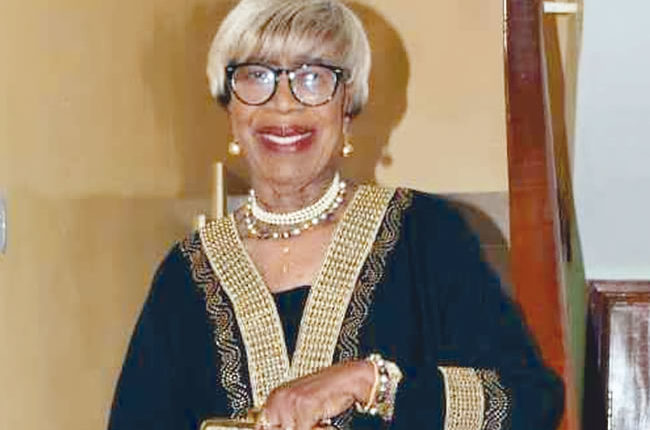 Chief (Mrs) Moulin Ashake Agbaje-Anozie, a foremost educationist, and founder of private schools in Oyo and Ogun states has clocked 90. In this interview by TAYO GESINDE, the daughter of the late Chief Salami Agbaje speaks about her childhood experience, passion for children and how she feels joining the league of the nonagenarians. Excerpts:

How do you feel clocking 90 in a country where the life expectancy of women is put at 55?

I will say I am grateful to God for sparing my life to witness my 90th birthday.  However, in the olden days, our parents lived to be 100 years and more. The secret is best known to them but all I can say is, it is the grace of God. I cannot say this was what I did that made me to live this long, neither did I do anything special, it is just the grace of God.

Growing up for me was very beautiful. I was born a Muslim, trained as an Anglican, but married to a Catholic, while I still remained a Muslim. I stayed with my grandparents, then moved to Lagos, where I attended CMS Broadstreet, Lagos. Later, I was taken to Ibadan, where I was born. My father said most of his children who went to missionary schools were converted to Christianity, so he said I should come and attend an Islamic  school. I was there for three years. I am from a polygamous home but we were very happy and united. My father was a disciplinarian. He was very rich but we were not spoilt. He employed people, including  foreigners to train us. He made sure all his girls were taught to cook foreign and local dishes. Before going to school, he would ask us,  “what have you done  in this house today?” We  were  all disciplined. My father  didn’t allow  us to visit friends, he believed we had everything we needed in the house but he didn’t mind  people visiting us at home. The first person to own a sawmill in Ibadan was my father. He was the first person to build a house made of concrete  block as well as, the first to ride a car. He had many businesses and during the holidays, we would all go to his factory to work.

What informed your choice of career?

My father had a school, Agbaje Memorial School, Ayeye, Ibadan. He was the first person to start a free primary school in Ibadan. By that time, I had already passed that stage, so I didn’t attend the school. Because  he  had a school, my father was sent so many books for training. It was one of the books that I came across that ignited my interest in teaching.

What were the challenges you faced when you started Children House School?

The challenges were not many. The only challenge I had was to train the teachers to work with me. In those days, there was no nursery school. All we had were infant or primary schools. It was a new thing. I had my training at Montessori Teachers Training College, St Nicholas, London. I was the first Nigerian lady to attend that school. I  had to combine being  a proprietor with teaching. I had to employ Grade 3 teachers because their qualification was equivalent to nursery school teachers. So, I had to employ and train them.  When I started school, it was named Montessori School but after independence, the ministry said they didn’t want foreign  names so we changed it to Children House School. The majority of the students were boarders. They stayed with me and my husband, they called us daddy and mummy, while they called their teachers uncles and aunties because we were one big family. It was a home school, they learnt with ease. The government used to give adhoc grants to schools at the time to support them. But that has since stopped.

What is the secret of your success as a school owner?

I think it is passion. My passion is that I love children. I see the parents of my students as my family and relate with them as such. When the parents are relocating or travelling, they leave their children with me because they know that they are safe with me and the children are always happy to stay. That is one of the things that helped us thrive and our fees are quite affordable. We also give scholarships to students who cannot afford to pay.

How did you meet your husband?

It was quite interesting. I first met my husband at the hospital when I went for treatment but I didn’t take  much  interest because, in those days, we looked down on doctors who were not trained in England, we used to call them Yaba doctors. But as FATE would have it, we met again later and that was how the romance started and God blessed it. When I took him to my father, he gave him two conditions that he should not try to convert me from Islam to Christianity and that he should allow me to travel abroad for further studies, he agreed and we got married and our union is blessed with children.

In those days, we had relations staying with us and we also employed house helps and I also do my part to ensure the smooth running of the home. I also thank God for the grace to combine my career with the home front successfully.

As an educationist, what do you think the government can do to revive the educational sector?

Government has a lot to do to revive the educational sector. The government should do a thorough inspection before approval to start a school is given. They should also be thorough in their supervision. They must ensure that it is only those that are qualified  that are teaching in schools. All stakeholders should be alive to their responsibilities. People should have the fear of God. When we have the fear of God, we will be able to do things right in this country.

As a mother and grandmother, how do you think we can raise godly children in this day and age?

There are two ways; have only the number of children you can manage. It is very important. If you can train or manage two or three, don’t have more  than  that. Civilisation has made it possible for people to control the birth rate. The second thing is that we need to be God-fearing and lay good examples for our children. Train your children from home don’t wait for the school, mosque or church to train them for you.

The cases of sexual abuse of children are on the increase in recent times. How can parents protect their children from sexual abuse?

We should be careful what we expose our children to. We must monitor them and pray for them.

Can you share with us tips on how to have a successful marriage?

You must work for it. It takes two to tango. Both husband and wife must try as much as possible to make their marriage work. Try your best and leave the rest to God.

We are in women’s month. What is your assessment of Nigerian women?

Nigerian women have gone far ahead of other African women. They are well educated and  are doing well in their field of endeavours. We are trying our best but our best is not yet enough. We must not rest on our oars, we must continue to go higher until we reach the zenith.

Looking back, what is the happiest day of your life?

I have had many happy moments with my family and children. The happiest day of my life was when my first son qualified as a surgeon in England. The ceremony was so fascinating that you would be moved. The vice-chancellor announced it that the ceremony was not for the graduands but the parents. It is true, it is for the parents who trained the children from cradle to that level. I was very happy and grateful to God.

What is the secret of your youthful look?

There is no secret. It is just the grace of God and I thank him for it. I also, think it is in the gene. Finally, I will say, eat well, live well and do things in moderation.

What advice do you have for young people?

They must be well educated. Once you are educated, the sky is your limit whether you are a man or a woman. It is through education that your eyes would be wide opened to see things that can bring success to you in future. They must also be industrious and must not be covetous.

Law and the Financial Act 2020

Why political gladiators in Oyo East must sheathe their swords