•Says universities must be solution centres 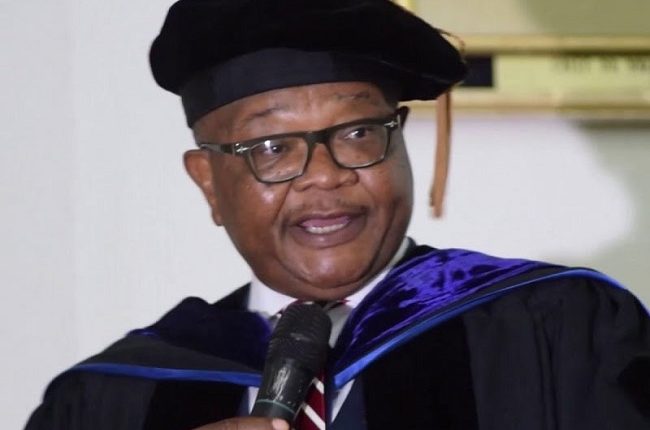 The Economic Adviser to President former Olusegun Obasanjo, Professor Osita Ogbu has described as unacceptable the report that more than 91 million Nigerians are currently living below the poverty line, that is less than 1.90 Dollars per day, saying this was an indication that “Nigeria has not made progress”.

Ogbu spoke on Friday in Abuja while delivering the 11th Convocation Lecture of National Open University of Nigeria (NOUN), with the theme: “The Fourth Industrial Revolution and the Challenge of Poverty Reduction in Nigeria”.

He said it was disturbing that more than 50 per cent of Nigeria’s poor are youths with the unemployment rate at an all-time high of 53 per cent in the fourth quarter of 2020, wondering how the youths could be positioned to benefit from the more demanding future without adequate skills and work experience.

“Developing skills and cognitive ability, a culture of discipline, curiosity, inquiry and innovation, starts at childhood. Yet, about 17 million Nigerian children are undernourished (stunted and/or wasted) with the highest burden of malnutrition in Africa and second highest in the world,” he said.

He further lamented that the country is also grappling with about 10.5 million children out-of-school according to the United Nations Children’s Fund (UNICEF), adding that these were the magnitude of problems staring the country in the face.

Ogbu said for a developing nation like Nigeria to sustain long-term prosperity, it ultimately needs good governance that fosters and supports a culture of innovation and encourages the manufacturing sector.

While also noting that education systems in Nigeria other African countries are archaic and severely underfunded, Osita Ogbu urged Universities in Nigeria to reinvent themselves, insisting that Universities should be centres of solutions.

He said: “The labour force is currently made up of mostly low skilled workers with low levels of productivity. Universities are not regarded, in Israel and other advanced countries, as centres of solutions with significant R&D and innovation roles.

“Nigeria has no single world-class engineering laboratory in any University. The curriculum is outdated and there is no inbuilt relevant practical training that aligns theory to practice,” he said.

He also called for the establishment of a National Science and Technology Fund, to focus on closing the innovation gap and in supporting the adaptation of “settled technology” for improved productivity across the sector.

According to him, to build a pipeline of future skills, Africa’s educators should design future-ready curricula that encourage critical thinking, creativity, and emotional intelligence as well as accelerate the acquisition of digital and Science, Technology, Engineering and Mathematics (STEM) skills to match the way people will would and collaborate in the Fourth Industrial Revolution.

Vice-Chancellor of NOUN, Prof. Olufemi Peters, in his remark, commended the convention lecturer, saying some of the issues raised were critical to the development of the country.

In spite of the huge investment in the water sector by the government and international organisations, water scarcity has grown to become a perennial nightmare for residents of Abeokuta, the Ogun State capital. This report x-rays the lives and experiences of residents in getting clean, potable and affordable water amidst the surge of COVID-19 cases in the state…91 million Nigerians  91 million Nigerians

The Lagos-Ibadan railway was inaugurated recently for a full paid operation by the Nigerian Railway Corporation after about a year of free test-run. Our reporter joined the train to and fro Lagos from Ibadan and tells his experience in this report…91 million Nigerians  91 million Nigerians

I will not run family affair administration in Ebonyi, says Ogba