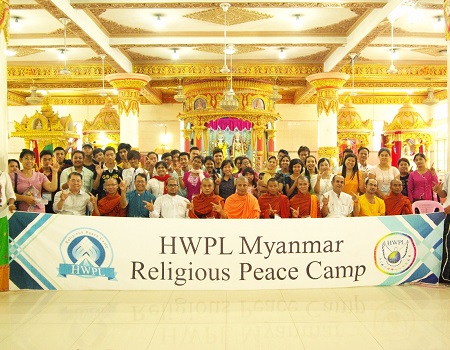 The development, according to HWPL is to check increasingly global conflicts and religious discord, stating that the role of religious people and leaders is becoming ever more crucial in the international community to ensure world peace.

Participants from Buddhist, Islamic, Protestant, and Hindu religions participated in the camp and experienced different cultures based on their religions. Each religious leader educated the group on the teaching of each scripture about peace.

The dean of the World Peace University, also a Buddhist, monk Jotika, who organized the event said, “This event has become a forum for young people with different religions. Peace will be achieved through mutual understanding and respect among young people.”

Based on the UN Charter and the principles of peace in various international organizations, HWPL has been carrying out peace projects based on the Declaration of Peace and Cessation of War (DPCW), which deals with the peaceful resolution of international law for dispute prevention, the guarantee of religious/ethnic identities and the propagation of peace culture.

On the first day, religious leaders and students visited Myoma Mosque in Sagaing to share opinions on the need for peace.

Before entering the mosque, they washed their hands and feet without hesitation to experience Islam culture focusing on its meaning which is keeping themselves clean in front of the mosque. The Imam of Myoma Mosque, U Soe Nay Oo, explained the meaning of Islamic customs and the features of mosque architecture while visiting.

On the second day, the participants had time to listen to the choir at St. Mary Church in Mandalay to understand what the Christianity people praise for. Then, they also visited Hindu temple, Shuri Sanatan Dama, and Buddist Sandamooni Pagoda while Ramachandra Das of Hindu also spoke on how to practice love and peace in their life.

In religion, HWPL has established World Alliance of Religions’ Peace (WARP) Office in 120 countries around the world to promote interfaith communication among religious leaders.

HWPL’s religious youth peace camp is aiming to approach to the mutual understanding and harmony in between religions and the people by experiencing and learning the culture and the teaching of each scripture.

Osun West bye-election: My pedigree will earn me victory —Hussain