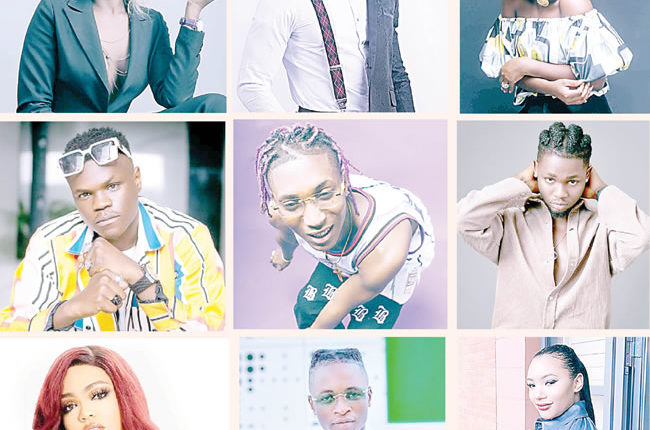 Towards the end of 2020 we saw many entertainers from all phases of the showbiz world rise to limelight, while some other stars were reintroduced, this time, via larger platforms. From the music, movie and comedy spaces, these stars have proven to be the next big thing to be watched out for this year. These stars started gaining more prominence in 2020 and are definitely going to be gaining more momentum this year. Here is our list of nine showbiz stars to watch out for in 2021.

Omowunmi Dada might sound familiar with a few people trying to get hold of the face behind the name. Yes, Omowunmi starred in ‘Oloture’, as Linda which was her most recent major role.  She was a sex worker in the movie and was murdered after disobeying orders.  Omowunmi started her acting career way back and was featured in The Gods are Still not to Blame in 2012. The 31 – year old actress has also played major roles in popular TV series such as :Jemeji, ‘Tinsel’,  ‘So Wrong So Wright’ and in other movies including’ The Ghost and the Tout’.  And even though she is not new to the game, she has been discovered afresh.  Her role interpretation and display of ease in acting will probably give the push in more movies to come this year. She won the Best Supporting Actress award at City People Movie Awards in 2017 and she is definitely on her way to making more waves.

Adebukola Oladipupo to you could be ‘Faa’ in the TV show ‘Shuga’ or ‘Tiaraoluwa’ in Ndani TV’s ‘The Men’s Club’ or the naive sister in the movie, ‘Oloture’ and the only character to escape the den of sex traffickers on their way to Europe. Whatever the name you remember Bukola as; she is definitely an act to look forward to seeing in more movies in the year. The London-born graduate of Covenant University started her career in SHUGA and has since then continued to prove her flexibility and versatility. She would act as daddy’s girl, a woke city lady or a naive villager seamlessly. Being featured in Oloture might be a career step for the 26 -year old. She has also acted in ‘Moms at War’ and African Magic FORBIDDEN among others.

Although not new in the industry, Stan Nze’s prominence in the industry over the last few months tips him as a face to look out for on our screens in 2021. The deep-voiced actor and model who has featured in over 40 movies, gained a reintroduction recently when he featured in RattleSnake (The Ahanna story) where he played the lead role as Ahanna.  The 31-year old graduate of computer science from the Nnamdi Azikwe University is best known for his role as Ohakanu in the popular MNet series, Tinsel. He is one fantastic actor to watch out for this year.

After winning the lockdown edition of the Big Brother Naija television reality show last year, all eyes have been on Olamilekan Moshood Agbeleshe, known professionally as Laycon, to take the music industry by storm, having shown the world what a talented rapper he is while he was in the house. Laycon, since leaving the house, has been the delight of many music stars as they all want to have him jump on their tracks. DJ Neptune’s nobody, featuring Joeboy and Laycon was a banger and has generated close to two million views on YouTube. Also enjoying massive airplay is his new video, ‘hip pop’ off his EP ‘Who is Laycon’, on which he featured singer, Deshinor. Just this year, Laycon has proven to be one hell of a rapper to watch out for as he amazed his fans and music lovers around the world when he jumped on the Jimmy Jump Off freestyle challenge. No doubt, Laycon is one music act to watch out for in 2021.

Bad Boy Timz, born Olorunyomi Oloruntimilehin’s skits and freestyles for which he received nods from industry giants (including J Hus) caught the eye of the record label and early in 2019, he signed a deal with Anonymous Music. As 2020 was ending, Bad Boy Timz’s luck started to rise as he got featured in Olamide’s Carpe Diem album with the track ‘Loading’. ‘Loading’ is still one of the songs topping charts across platforms currently. Bad Boy Timz’s songs like MJ featuring DMW star act, Mayorkun was also one of the songs that rocked 2020. With his distinct sounds, Bad Boy Timz has shown he is one of the artists to beat in the industry. He is also currently nominated at the Headies in the Rookie of the Year category. We should definitely look out for this raw talent this year.

Though he was one of the newest artistes that rocked 2020, dropping two banging EPs, ‘Get Layd’ and ‘What have we done’, each EP consisting of hit singles such as ‘Damn’, ‘LoLoLo’, ‘Godly’ and many more, we seem not to have gotten enough of the Port Harcourt-born artiste yet. Stanley Omah Didia, being his real name, became widely accepted with his pattern of music throughout last year, majorly. His songs enjoy massive airplays, streaming across all platforms; he is definitely the next big thing out there. Omah Lay is currently nominated alongside Bella Shmurda, Oxlade and Tems in the ‘Next Rated’ category of the Headies and we expect to see more of him this year.

Rate ‘Cash App’ by Bella as one of the greatest party jams in 2020, you are not out of context. With this jam and other songs like ‘Vision 2020’, ‘Sho mo mi’ from this talented singer, 2020 seems to be his year as he already saw the vision. Towards the end of last year, Bella Shmurda also got featured in Olamide’s Carpe Diem album with the track ‘Triumphant’, which also enjoyed massive airplays and online streaming across platforms. This year, the 24-year old isn’t slowing down at all as he already gave his fans something to chew about. With his new track ‘Rush’, he has just announced his readiness to dominate the music space this year too. Bella Shmurda is also nominated in the ‘Next rated’ category of the Headies. He should definitely be watched out for.

Rebecca Nengi Hampson might not be just BBNaija Nengi anymore!  Nengi from Bayelsa State has proven to be ‘more than just a beautiful face’, as that was what she said when she made her entrance into the Big Brother Naija Lockdown season in 2020. She has gone on to show her creativity and talent beyond the house. As a housemate she was the first female to become the Head of House and gained popularity quickly. After the show, it was announced that Nengi would be featured in Davido’s ‘Jowo’ music video. She also made a film appearance in Nigeria’s classic ‘Rattlesnake: The Ahanna Story’ later in the year.  She is surely an act that will be on screens severally this year.

Temi Otedola should be a name that resounds because of her surname or for her prominence on social media or the fact that she debuted in Kunle Afolayan’s ‘Citation’; a movie that went on Netflix in 2020. Temi made her debut with a significant entrance into Nollywood to play the lead character in the movie. The 24- year-old multilingual, fashion blogger and lover of art is sister to popular Florence ‘DJ Cuppy’ Otedola.  Featuring in CITATION is a special debut and she will smoothly pave way for national and global recognition in times to come.