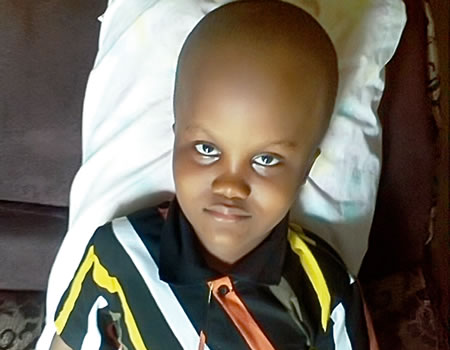 FOR the parents of Yusuf Kehinde Abdulraheem, tending to the needs of their son has been herculean.Eight-year-old Kehinde has been unwell and battling to lead a normal life.

His distraught father, recounted bordeal: “Abdur- Raheem Kehinde Yusuf, one of my twin sons, has been receiving treatment since he was six months old. He and his twin brother, Abdur- Rauf Taiwo Yusuf, were born on September 19, 2009 at the General Hospital, Iseyin, Oyo State. But when they were six months old, Kehinde developed high temperature prompting us to take him to Ado-Awaye General Hospital, Ado-Awaye, Iseyin Local Government Area, Oyo, where the Chief Medical Director of the hospital then, Dr Abiodun Odebode, administered a drip via Kehinde’s head and discharged him the following day.

“The third day, we noticed that Kehinde, who had been sitting before we took him to the hospital, could no longer sit down on his own ,and we noticed that his head started growing bigger than his entire body.

“On getting back to the doctor, he said the hospital workers were on strike. On getting to his private hospital, Holy Land Hospital in Iseyin, we were instructed to administer Kehinde with multivitamin syrup.

“After administering about 20 bottles of multivitamin syrup without any change, the doctor started avoiding us. He said there was nothing he could do to remedy the situation. We decided to take him to private hospitals where we spent more than N20,000 in each of the hospitals.

On getting to the tenth hospital, Awojobi Trado-medical Hospital, the doctor in charge, Dr. Awojobi referred us to the University College Hospital (UCH) on June 15, 2011.

“At the University College Hospital (UCH) Ibadan, we were asked to bring N685,000 (Six Hundred and Eighty-Five Thousand Naira Only) for the first surgery so as to stop the swelling of the head. An ETV surgery was carried out successfully in late 2011. I was elated though we spent far more than the official UCH N685,000 estimation cost bill. I had to sell my car and personal household items to raise this money.

We were then asked to come for post-surgery treatments and to my utter shock, the doctor announced that he would have to carry out another surgery. It was in 2014 that I was able to raise money. But even with the money, the hospital was on strike then. Because of the urgent situation of the condition of the boy, we headed to the University of Ilorin Teaching Hospital, Ilorin, Kwara State, where the surgery was carried out successfully. Because of the distance between our base in Ibadan and Ilorin, the doctor at the University of Ilorin Teaching Hospital referred us back to the University College Hospital (UCH) Ibadan for physiotherapy.

“We have been paying for the physiotherapy, but can no longer afford the bill. Though Kehinde now eats well and the head no longer swells and he now talks unlike before, he is yet to sit and walk. Also, he is yet to control his neck and he still has seizures at regular intervals.

”All these, according to the latest bill, will cost us N575,487, including a minor surgery on his legs so as to make him sit and walk and live a normal life. The above cost also includes his neck aid, leg aid and special chair to enable him sit and walk.

“While his twin brother, Abdur-Rauf Taiwo Yusuf, is now in Basic 5, Abdur-Raheem Kehinde Yusuf is yet to start school because of his condition. Please help, for God’s sake.”

How Reps will reposition NDDC —Tunji-Ojo