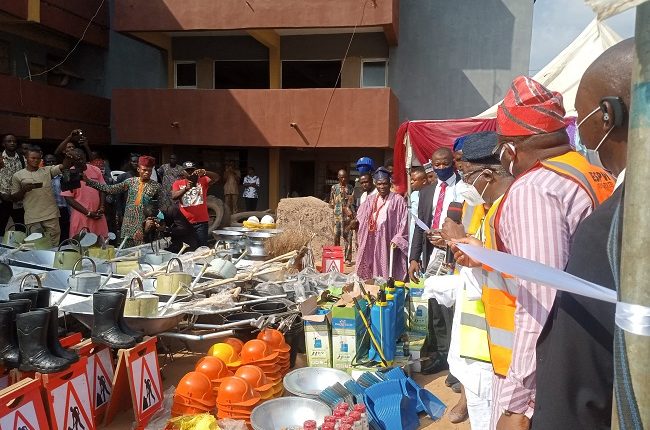 The extended special public works programme for 774,000 Nigerians was flagged off in Oyo State, on Tuesday, with Governor Seyi Makinde of Oyo State urging the beneficiaries to justify their selection and impress it upon the Federal Government to extend and expand the programme.

Speaking at the event held at Akinyele local government secretariat, Makinde, who was represented by his deputy, Mr Rauf Olaniyan, lauded the three months special public works programme as a direct attack on unemployment and hunger.

He urged the Federal Government to institute certain performance indicators to determine whether the progression of the programme in terms of number or duration.

In particular, he cautioned the beneficiaries against looking down on the N20,000 monthly pay, but utilise the opportunity to acquire skills with which they can be self-employed.

Makinde held that the special works programme of the Federal Government complimented the state government’s resolve to reduce unemployment with the state set to issue appointment letters to its newly recruited teachers, medical workers and counsels.

Mr Ajao Olufemi who represented both the Minister of State for Labour and Employment, Festus Keyamo and Minister of Youths and Sports, Sunday Dare, assured that the Federal Government had provided all needed equipment and funding for the beneficiaries to effectively carry out their assigned tasks.

While stating that the Federal Government will closely monitor implementation of the programme to ensure judicious usage of provided tools, Ajao urged the beneficiaries to deploy the skills acquired to be self-employed and self-productive.

Chairman, Oyo State Selection and Implementation Committee, Mr Salami Ope, urged the beneficiaries to see the programme as an opportunity to change their life for the better.

He charged the 33,000 beneficiaries of the state to take their various rehabilitation and maintenance assignments seriously and judiciously use the funds to be received.

South West Director, National Directorate of Employment (NDE), Mrs Stella Odunwa, also urged the beneficiaries to utilise the skills learnt to impact their lives and the society at large.

She stressed that the programme was in winning the war against mass unemployment and ameliorating effects of COVID-19 on Nigerians.

She assured of a fraud-free disbursement of funds and harped on diligence to duty by the beneficiaries.