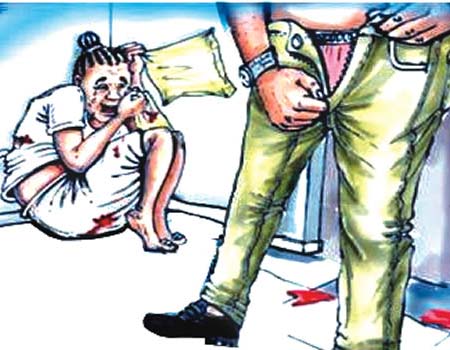 A 67-year-old man, who allegedly defiled an 11-year-old girl, has been charged to court in Delta State.

The suspect allegedly forced himself on the Junior Secondary School One (JSS1) pupil when she went to the suspect’s wife’s salon to plait her hair.

The salon is said to be a shanty attached to the suspect’s abode along Okpe road area of Sapele, in Sapele Local Government Area of the state.

It was gathered that the girl had always been going to the salon to make her hair prior to the incident.

Sources had it that while waiting for her turn in the salon, the girl was ‘giraffing’ a TV monitor through the window of the woman’s house where the suspect was cooling off.

Disclosing the incident to journalists, a neighbour, who’s a teacher in Sapele, Comrade Ovo James, narrated what transpired.

“She came that day to do her hair and because the woman was busy doing another person’s hair, the girl had to wait and she was watching television from outside through the window.

“The window was a bit close to the salon, so the suspect’s wife then advised her to go inside and sit down and watch the programme on the television.

“That was when the husband of the hairdresser took advantage of her and defiled her,” the source narrated.

Sources said the victim did not scream for help during the act as the suspect was believed to have gagged her mouth with clothes to prevent outsiders from being alerted.

The suspect, sources also believed, after the act, threatened the minor with the scare of death if she intimated a third party.

But her vigilant mother was said to have noticed some changes in her daughter when she returned home, prompting a flurry of questions leading to the arrest of the suspected paedophile.