Latest NewsMotoring and Transport
By Seyi Gesinde On Nov 8, 2017 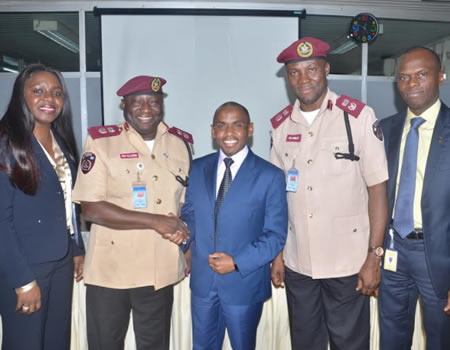 The Federal Road Safety Corps (FRSC) has reiterated its commitment to enforcement of the installation of speed limiting devices into vehicles, just as it said thus far, 64,097 vehicles have been installed with the device, translating to 40% compliance level among commercial vehicle drivers.

The FRSC boss, represented by Corp Commander, Lagos State Command, Mr Hyginus Omeje, while thanking Guinness Nigeria Limited for remaining steadfast as a corporate ally in road safety management in Nigeria, said the enforcement of speed limiter installation” will provide bolster for our drive towards making our roads safer especially during the ember season.”

The theme of the ember season campaign is “Right to life on the Highways: Not Negotiable,” which the FRSC boss said was deliberately designed to underscore the need for every road user to embrace road safety as a serious business and for motorists not to compromise on their safety while plying the highways.

He said: “It also brings to bear the need for us to always adopt the defensive techniques as drivers and ensure that our safety does not depend on the driving conduct of the driver in the other vehicle.”

While calling on drivers to steer clear of drink-driving, he said “it is not out of place to add that a drunk driver is more likely to drive dangerously or commit traffic violation.”

The FRSC boss disclosed that drink-driving is also a global concern, saying the United Nations’ Decade of Action on Road Safety aimed at reducing fatalities and injuries by 50% come 2020 is worrisome.

With this worrisome trend, he said the bulk of the casualties are the youths who form the economic productive bracket of Nigeria.

To curb drivers’ excesses on the road, he said the FRSC had constituted “operation cobra enforcement” as part of the Corps’ numerous initiatives towards improved road culture,” singling out drunk-drivers as a taking a large place in different categories of traffic offender booked by the Corp’s traffic law enforcers.

Thus far, the FRSC boss said the operation had recorded a total of 2,800 offenders who contravened 3,415 offences, with 1,306 referrals to government hospitals for emotional and psychological evaluation.

As a global brand and leading manufacturer of beverage, Boboye acknowledged the commitment of Guinness Nigeria Limited to the promotion of responsive drinking among Nigerian road users through the “Don’t Drink and Drive” campaign and other numerous initiatives aimed at complementing the FRSC’s efforts towards safer motoring environment across the country.

He said in the past, the Corps had partnered with the management of Guinness Nigeria Limited on several projects such as the “Plan Ahead” initiative in 2011, with a collective desire to familiarise the Nigerian motoring public with effective management of time and proper maintenance of vehicles before plying the highways.

As the year draws to a close with attendant road traffic peculiarities, he said the FRSC had designed a sustainable road map in its usual tradition to ensure safer road use especially during the ember season. In doing this, Boboye said the Corps will embark on “intensive patrols, rescue services, robust public enlightenment campaigns and strict enforcement of traffic rules and regulations.

“This year’s event which is the 10th in the series, the Corps Marshal said will feature the legendary footballer, Thierry Henry, who, he said will “play the role of a brand ambassador on this joint initiative to further influence our youths and other road users positively on responsible drinking.”

“As you are aware, most of us live with the misconception that the ember months is a season of road traffic crashes which can be attributed to the activities of witches and other forms of diabolic practices which results to road crashes between the months of September and December.

“Permit me to state that road traffic crashes do not have any linkage with any diabolic practice but can be traced to the attitude of drivers and other road users within the ember season.

“Most people set targets for themselves and tend to be anxious towards the end of the year especially when their projections do not fall into place.

“This same scenario is responsible for reckless driving, disregard for traffic rules and regulations and other forms of road vices among drivers who in the process of having so much on their minds, lose their sense of judgment while plying the highways.

“This campaign therefore, is a timely reminder that drinking and driving does not only pose a threat to the live of the drunk driver, but also to the lives and properties of all road users, motorists, pedestrians, and even animals) with attendant negative impact on the nation’s economic growth.

“During the Ember Months period of 2016, a total of 31 traffic crashes involving 122 people which was primarily caused by driving under the influence of alcohol was recorded. There were 53 injuries and 5 people were killed.”