•We will provide security in that axis –Govt. 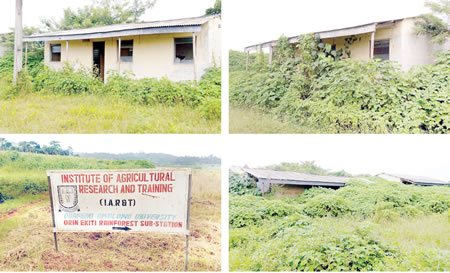 Once a thriving farming settlement, 60 years later, the place now bears more resemblance to a thick forest where danger lurks, and a ready home for criminal minds. ‘YOMI AYELESO takes a journey to the Orin-Ekiti Farm Settlement established in 1959, and reports the gradually degenerating state of the once bubbling hub of agricultural activities.

IN a bid to generate employment opportunities and improve the standard of living for unemployed youths through agriculture, the government of the late sage, Chief Obafemi Awolowo, of the old Western region, established a farm settlement in Orin-Ekiti, Ido-Osi Local Government Area of Ekiti State, about six decades ago; precisely in the year 1959.

Agriculture is fundamental to the economic growth and development of any nation. It is the oldest production activity of settled Nigerian communities, and it is tied to various sectors, which is essential for generating broad-based growth necessary for development. It was the realisation of this that necessitated the establishment of the farm settlement by the Western government. It was to provide a model for farmers to learn modern techniques and methods of farming and to engender employment generation.

Youths across the western states were engaged and allocated portion of lands in the settlement in large numbers to engage in agricultural activities for commercial purposes under the management of officials from Israel. On a monthly basis, each youth was paid three pounds for their upkeep.

The farm settlement had 96 self-contained buildings, which serve as accommodation for the settlers. The settlement was grouped into two categories; one for permanent crops and the other for arable crops. The permanent crops included cocoa, cashew, oranges, while arable crops included maize and groundnut. Aside the planting of crops, there was also rearing of chickens and pigs. The settlement became a agricultural hub, and people came from far and near to buy farm produce, including eggs, for consumption and commercial purposes.

Aside employment generation for youths, other members of the public were engaged to work in the settlement as carpenters, bricklayers, cleaners, gardeners, among others. The Orin community witnessed an in-flow of people from within and outside Ekiti State, who thronged the farm settlement for agricultural products.

Although handed over to the state government for proper monitoring and administration, the settlement has instead witnessed utter neglect by successive governments in Ekiti State. Governments put in place measures, but they have achieved little or no results after successive tenures.

Former Governor Segun Oni, during his administration, was said to have brought officials of the state ministry of agriculture to the settlement, and engaged some individuals in a bid to revamp the place. However, this attempt failed after he left office. Also, the administration of the immediate past governor, Mr. Ayodele Fayose, planted some crops on the farm, but there were no activities in the area, thereby making the youth settlers vacate the settlement in search of greener pastures.

A visit to the farm settlement by Nigerian Tribune after 60 years of its establishment showed that it had been overtaken by complete neglect and abandonment. The buildings have been overgrown by weeds, and the place is fast becoming a thick forest. There was no equipment in sight in the settlement, and only buildings with damaged roofs were left in the place. However, part of the farm is currently being used by the Institute of Agricultural Research and Training of the Obafemi Awolowo University, Ile-Ife, Osun State.

Interestingly, the farm settlement, which is about 30 minutes’ walk from the main town, was in the news recently as the place was said to have been taken over by criminals. Members of the community alleged that persons suspected to be criminals used the settlement as a hideout to commit crimes in the area.

In June 2019, Mr. Emmanuel Ilori, a hunter, was allegedly killed on the farm settlement around midnight by suspected herdsmen. Others who would have been victims as well narrowly escaped. It was also gathered that a pregnant woman was killed in 2018 in the same farm.

Narrating how Mr. Ilori was killed, a hunter, identified as Adeniyi Ajayi, alleged that herdsmen, numbering about 30, were sighted in the abandoned farm settlement.

“When we attempted to inquire what they were doing on the farm, the herdsmen opened fire on us, resulting in the death of Ilori. The herdsmen are kidnappers using the farm as a hideout,” he said.

The killing led to a protest by youths in the community, during which they called on the state government to address the spate of criminal activities in the area.

Speaking to Nigerian Tribune, a community leader, High Chief Francis Falua, said the settlement was conceptualised to solve youth unemployment in the region. He added that successive governments had failed in this regard.

He said: “There were plantations such as cocoa and oranges, which were handed over to the settlers for monitoring. There was also a piggery and a fish pond. Unfortunately, government failed the place.

“One of the reasons the farm settlement collapsed was that the government at the time promised to give three pounds each as stipends to the settlers for their upkeep. The stipend was paid for some time, but later, government defaulted in payment. This development led to the moving away of the settlers.

“It is a very bad idea in this country that there is no continuity in governance and that is why we have abandoned projects everywhere.”

While regretting that the place had become a hideout for criminals, Falua disclosed that farmers could no longer go to their farms for fear of being attacked by suspected herdsmen.

He urged Governor Kayode Fayemi to ensure that farming activities were re-introduced in the settlement by the establishment of an industry, which would also see to the provision of job opportunities.

He continued: “When the Governor visited this place after the last incident in June, we told him that government should do something about that place. If something is happening there, nobody will hide there to perpetrate crimes. That land is there; let government establish a factory which will create employment opportunities for our people.

“Although since the killing of Mr. Ilori in June, we have not heard of the herdsmen. However, our people are still in fear. Most of them can no longer go to their farms because of them. Nobody can say if the farm settlement is safe at the moment.

“What we want the government to do now is to check the objectives of those who established the place and follow it. This will go a long way to reduce youth unemployment, as well as increase government revenue. . We also discussed with the government on the establishment of a School of Agriculture for students to make use of the facilities.”

Mr. Joseph Fadahunsi, who worked in the settlement as a carpenter revealed that the place was a turning point for many people at the time it was a hub of agricultural activities, seeing as employment opportunities were available.

86-year-old Fadahunsi, who left the settlement in 1985, lamented the current state of the settlement, and urged government to establish a specialised institution for students to take advantage of the facilities.

He said: “I worked at the farm settlement as a carpenter before I left in 1985. The settlers were given these crops and also the poultry to manage. It was doing well and money was generated, because people come from different places to buy these things. Aside graduates, carpenters, bricklayers, and gardeners were employed.

“For security purposes, government must start something on that farm so that it will not serve as a hideout for these people killing and kidnapping. If possible, a school of agriculture should be established at the place. It will help the students a lot.”

Meanwhile, the state governor, Dr. Kayode Fayemi has revealed that government would ensure adequate security in the farm settlement.

The Chief Press Secretary  to the governor, Yinka Oyebode who spoke with Nigerian Tribune said the government has concluded plans to have a police post in the settlement.

According to him, “The last time the governor visited the place he promised that a police post will be put there to provide more security because we observed there was no security post in that axis and that is why criminals are using the settlement as hideout.