60 policemen benefit from US anti-bomb training 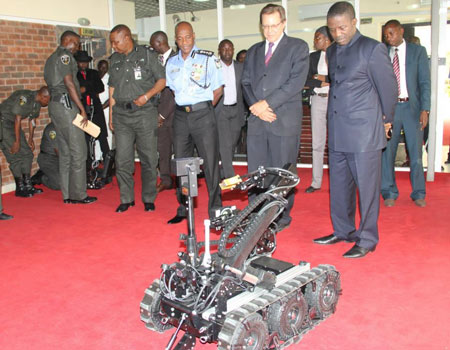 The U.S. on Monday began an anti-bomb training for 60 Nigerian police officers to equip them to clear explosives from reclaimed communities in the North-East and ensure safe return of citizens.

The Inspector-General of Police (IG), Mr Idris Ibrahim, said at the commencement of the four-week training in Lagos that the communities are in Borno, Yobe and Adamawa.

The IG who was represented by the Deputy Inspector-General of Police (DIG), Operations, Mr Joshak Habila, said that the training would also improve the capacity of personnel to be deployed to the Niger Delta.

According to the I-G, the officers are from the Explosives Ordinance Department (EOD).

“These trained personnel are to ensure that the communities were cleared of all explosives for the safe return of displaced persons to their lands.”

“We are about going into another phase in the operation; our responsibility is to assure displaced persons of safe return to their communities.”

“We will also enlighten the civil populace on bomb detection so that whenever they see unfamiliar items, they will not touch them,” Ibrahim said.

He said that it was on record that mines buried by Boko Haram in the North-East were more than those buried during the civil war.

“We are fortunate to have U.S. anti-bomb experts to come and train us on how to detect buried mines.”

“The police have given a good account of themselves in the past, particularly, in detecting and detonating Improvise Explosives Ordinance.”

“We must take advantage of this training because we will soon deploy those trained to the affected areas on post-blast investigation.”

“It is our duty to identify remnants of these explosives and take them safely for analysis with a view to detecting where they were manufactured and who manufactured them.”

“For the trainees, they should bother about chemical, biological and nuclear weapons, which are the new threats globally,” Ibrahim said.

One of the facilitators, Jon Demarthino from the U.S. Anti-Terrorism Assistance Group, commended the trainees for their gallantry.

Demarthino, who said that the training would be hard and tasking, urged the participants to give it their best in order to achieve the desired results.

He expressed the optimism that the training would positively impact on the police and the country.

He urged the participants to extend the knowledge gained to their colleagues.

“There is no way we will train all Nigeria Police personnel at a time.”

“However, with this 60, we believe it will spread round to a greater percentage of the force,” he said.

Earlier, the Commissioner of Police, EOD, Chika Maidama, hailed the I-G and the Americans for the training, hoping that it would deepen the officers’ knowledge.

PDP‘ll address all labour related obstacles if… ―Sheriff to workers