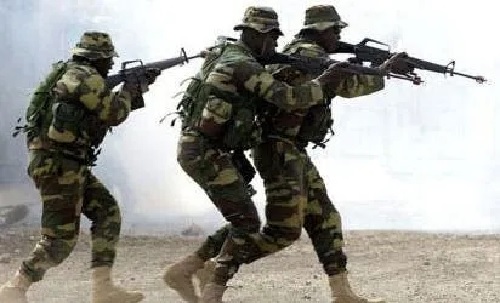 SIX soldiers and a member of the Eastern Security Network (ESN) have been reportedly killed in Abia State.

It was also gathered that the fierce exchange of gunfire between the gunmen and soldiers had caused an exodus of residents and indigenes of Elu, Amangwu, Ebem and Amaekpu, Ohafia Local Government Areas from their respective communities to neighbouring villages for the fear of being caught up in the crossfire and a possible reprisal from the soldiers.

Unconfirmed reports have it that six soldiers and a member of the Eastern Security Network (ESN) had been reportedly killed in the exchange of gunfire. Residents of the affected communities were said to have sent a distress call to the senator representing the area, Orji Uzor Kalu, who doubles as the Senate Chief Whip, and other political leaders from the locality.

A source that spoke to journalists on the condition of anonymity, stated that there had been panic flight by the male youths in the area, for fear of being indiscriminately whisked away by the soldiers and other security agencies, who might not be able to prove their innocence in the crisis.

The male youths, the source added, were fleeing to other communities pending when normalcy would be restored.

Army spokesman, Captain Dauda Illiya could not be reached as at the time of filing this report. While the Police Public Relations Officer in the state, SP Geoffrey Ogbonna, could not confirm the report. According to Ogbonna, he was yet to be informed of such development in the area.

Igangan massacre: Who is to blame?