Entertainment
By Joan Omionawele On Jul 16, 2016 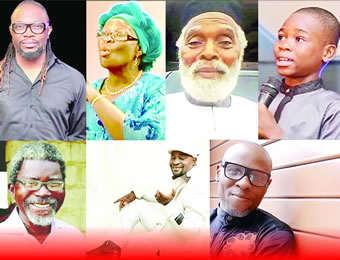 OJB Jezreel
Popular producer, OJB Jezreel sparked off sympathy when, in 2013, an SOS was sent to the general public to help raise funds for a kidney transplant. Well meaning Nigerians rallied to raise the money and heaved a sigh of relief when the producer got a donor (his first wife). Sadly to the shock of Nigerians, the musician gave up the ghost on Tuesday, June 14, 2016, n few weeks to his 50th birthday and a week after his kidney transplant had failed completely.
He was known for producing Tuface Idibia’s popular song, ‘African Queen ‘and for giving many artistes the opportunity to showcase their talents to the world.
He is survived by three wives and eight children.

Bukky Ajayi
The thespian who was born 82 years ago was known for her confident and daring roles in movies especially ‘Thunderbolt’ and ‘Fuji House of Commotion’.
She was described as a devout muslim, who dedicated her life to serving God. She was reported to have battled heart -related problems until she gave up last week.
According to report, she had suffered from stroke some couple of years back. There was a time she also had cerebral malaria. She became diabetic, hypertensive and also suffered breast cancer before her death.

Nomoreloss
Popular singer, Muyiwa Osinuga, who was popularly known as Nomoreloss with his hit song ‘iyawo asiko,’ died after battling what was reportedly described as typhoid.
The soft-spoken singer spearheaded the fund raising committee to support the late OJB Jezreel’s kidney transplant.
He began his sojourn in the entertainment industry as a rapper before switching to stand-up comedy and then becoming a singer. In 1999,

Henrietta Kosoko
Nollywood actress and wife of veteran
actor, Jide Kosoko, Henrietta Kosoko was known for her motherly roles in Yoruba movies.
The actress was said to have survived a ghastly motor accident last year. Until her death, she had four children.
It was revealed after her demise, that the actress had an unfulfilled dream of seeing one of her twin sons’ career to its heights before she died.Nomoreloss released the first single titled ‘Kilode’ from his first album.
He is survived by his wife, Phoenix, a radio presenter and daughter.

Kid Actor, Olamide
Kid actor, Olamide shortly before his death, had received an award from the Best of Nollywood as the best child actor.
He reportedly died at the General Hospital, Ikeja, where he was rushed to after complaining of stomach pains after playing soccer with his friends on January,
He was aged 14 before the sad incident.

Genevieve Nene
Fast-rising actress, Genevieve Nene, had just featured in a few movies before she died in her prime. Saturday Tribune gathered that the actress died in May 1st as she was recuperating from Typhoid fever.
Before her death, Genevieve, a graduate of the Institute of Commerce, a, appeared in music videos like ‘Aiye Miami’ by Lace featuring Reekado Banks and Pasuma, Samklef’s ‘Birthday Girl’ featuring May D and and Skripture’s ‘Sweet Trouble’.

Arakangudu
Prominent actor Sikiru Adeshina, also known as Arakangudu died of cardiac arrest in Kaduna state.
He was known for his roles as either a herbalist or an armed robber in Yoruba movies, which he interpreted effortlessly.
He was survived by his wife and children.

Jab Adu
The ace Nigerian actor was popular for his role Bassey as Okon in the popular TV series, The Village Headmaster, created in the 60s.
Born in Calabar, Cross River state, he started his primary education in Lagos when his father relocated to Lagos.
Until his death on February 28, 2016. he was also a director, credited in movies such as “Cool Re (1976)” and “Bisi, Daughter of The River.”

My wife is a dirty person, a terrible cook, husband tells court •I do not know why he stopped eating my food —Wife