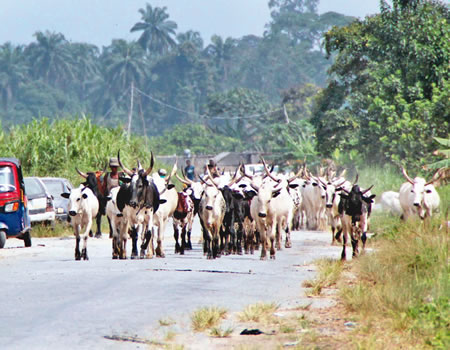 ABOUT six persons have been killed during a clash between Tiv farmers and fulani herdsmen at Gbemacha council ward in Gwer Local Government Area of Benue State.

Sources told Metro that the crisis was as a result of alleged killing of a Fulani herdsman which led to a reprisal attack.

The source explained that herdsmen had in the last few weeks invaded Gbemacha community with about 5,000  cows which destroyed  cassava farms in the area.

Irked by this, according to the source, youths from the area had to mobilise themselves and resisted the influx of cows into the area which resulted in crisis that led to the death of the herdsman.

According to the source, “this did not go down well with youths of the area who tried to resist them, but were equally countered by the armed herdsmen who besieged the community in great numbers and sacked the locals from their homes.”

Speaking on the issue at Nigeria Union of Journalists (NUJ), programme tagged “Accountability”, in Makurdi, the Special Adviser to the state Governor, Bureau for Lands and Survey, Professor Jonathan Uever, who hails from the area, said the attack was unprovoked.

According to him, “they were not provoked in any way. From what I gathered from my people who had been giving me update on the crisis in the last three days, the herdsmen stormed Gbemacha council ward and everybody ran for their lives.

“They took over our community and broke into people’s houses, destroyed food barns and burnt, food items.

Thereafter, they went and hid near a popular well in the community. The first person they saw was an elderly man, who they shot and slaughtered with three others.

“As I speak with you, I’m being inundated with phone calls from my people on the matter, but I’m in touch with the local government’s sole administrator.”

How Fulani Herdsmen attacked Okada rider with machete, robbed him of his motorcycle…

20 killed, 10 others injured in Plateau

Suspected Fulanis killed one woman, injured other in Benue