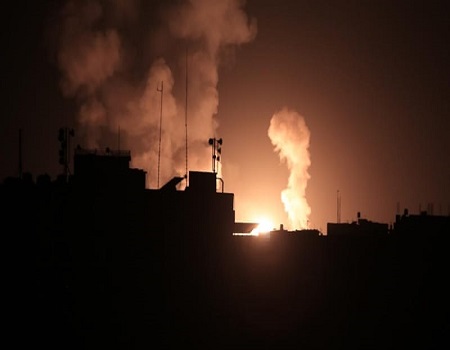 According to the Israeli military, its fighter jets struck Islamic Jihad targets South of Damascus, as well as dozens of other sites across the Gaza Strip.

The Syrian Observatory for Human Rights, a Britain-based watchdog, said the Israeli shelling killed at least two Palestinian members of the Islamic Jihad and four from the Iranian-backed militias, and a Syrian national.

The watchdog said the shelling hit a post manned by the Islamic Jihad and the Iranian Revolutionary Guards, located a few kilometres from the Damascus International Airport.

Syria’s state-run News Agency, SANA, said Syrian air defence responded to the missiles in the airspace over the capital.

The Israeli army said an Islamic Jihad compound was struck in the Adeliye region outside Damascus.

According to the army, the compound was used as a hub by the Palestinian movement, for research and development of weapons, for manufacturing a rocket fuel chemical called ammonium perchlorate and for training militants.

In the Gaza Strip, the dozens of targets include the headquarters of the Islamic Jihad’s Khan Yunis Brigade, where, among others, militants train in anti-tank missile use.

Gaza’s Health Ministry reported that four people were injured, one of them critically and three moderately, after Israeli warplanes struck a squad of militants firing rockets from Eastern Gaza.

The Islamic Jihad claimed responsibility for firing barrages of rockets and mortar shells at Israel after Israeli soldiers shot dead a member of its armed wing, planting an explosive device at the heavily secured border fence with Israel.

The latest escalation comes a week before an unprecedented third parliamentary election in Israel. Following the barrages, school lessons were called off and roads closed in Southern Israel.