59th Independence Day celebration: ‘What we think about Nigeria’ 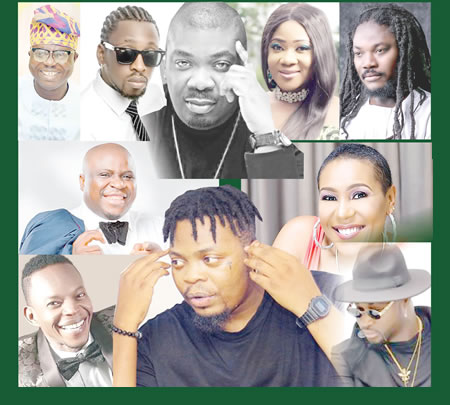 As Nigeria celebrates her 59th Independence anniversary tomorrow, Nigerian celebrities, who have had their fair share of the nose-diving economy didn’t spare words on how they have fared in the last few years. They shared their views on the state of the nation with some of them scoring the government low while others submitted that with time and purposeful leadership, the country would overcome its challenges. SEGUN ADEBAYO, who spoke with them presents their responses.

Gbenga Adeyinka: I think we must never shy away from any opportunity to celebrate Nigeria. We might not be wherever we want to be, but we are certainly not where we were. We must and should celebrate our resilience as a people and nation. Things might not look the way they should be for many entertainers, but we must keep hopes alive and celebrate this country. This is our country and we must ensure we celebrate ourselves.

Koffi Idowu: We should not deceive ourselves with the belief that we were not where we used to be. As far as I am concerned, there is nothing worth celebrating. We need to reflect on the realities on ground and make committed efforts to save this country from its final stage of demise. The situation staring at us, whether we like it or not, is worrisome. I pray we rescue the situation before things collapse finally. The situation is precarious and we can’t live in denial.

Don Jazzy: How enormously beneficial would it have been if we had an agrarian and oil economy, flourishing simultaneously. It is very sad how we have failed to exploit the resources we have been blessed with as a nation. We have a lot, yet we complain a lot.  We can’t ignore the outcry of the masses despite the fact that objective criticism these days is mistaken for some political inclinations. I am not in for political opportunism, I am just a concerned citizen.

Daddy Showkey: We can’t rule out the fact that things have been bad. Many entertainers have had it rough but we can look forward to a better nation as we celebrate the country’s independence. We have come a long way as a nation and our peace and unity have been threatened several times but we have remained an entity. I will just urge the government to make life more meaningful for the populace through people-friendly policies. We can’t afford to keep pretending that all is well. This is our country and we must do our best to keep it one for the benefit of all.

Shan George: I think the fact that some people fought for our independence with their sweat and hard work, we must continue to honour them by celebrating the day. While I share in the feeling of those who are worried about the state of things in the country, I want to also call for calm. We as a people can’t afford to keep wishing bad for the country because this is the only place we can call home. As much as I know that lives have not been better, things are not looking up and many people are grumbling, we must keep hoping and praying that our country gets better. I have actually not been paying attention to a lot of things happening around because I have been concentrating on my health. Thank God I am getting better now. I feel Nigerians deserve to be happy in their country, they deserve a good life. I think the new government is still acclimatizing; I will wait till end of their second term before I would pass my verdict. For now, I am observing and hoping that they get it done.

Bolaji Amusan (Mr Latin): No matter how bad one may feel, you can never forget or ignore your birthday.  We may not have had it right over the years, but we can’t close our eyes to some of the good things that have happened and are still happening. Until Nigerians begin to do things the right way, pay their taxes, stop supporting mediocrity, keep the government on its toes rather than praising them, we will continue to be on the same spot. Some of us are the reason the country has not been able to progress. We are the people who chose the leaders we got. The leaders didn’t choose us. Head or tail, this is our country, we will keep praying that we get it right. I think we should celebrate the Independence Day.

Audu Maikori: Our leaders in Africa and Nigeria do not think of the next generation but the next election. They give out a pittance as charity instead of setting an atmosphere for the increase and growth of wealth. So, the masses remain consistently impoverished. If our state governors actually focuse on the actual needs of the people, there would be less pressure on the Federal Government to deliver. Education is nill, unemployment is at an all-time high. We need a new partnership and understanding between the government and the private sector.

Saheed Balogun: The situation calls for sober reflection. It is Independence Day and we have to look at where we are coming from and where we are, then we can begin to talk about where we are going as a nation. Nigerians deserve the best from the government and the people must also show the zeal to embrace new ways of doing things. For me as an entertainer, I will urge the government to do the needful by creating an enabling environment for entertainers to do their jobs, then the government can wait to see how much it would generate from a regulated and well-structured entertainment industry. We have held discussions with the representatives of government and we hope that they would walk the talk. A very structured movie industry is enough to earn the people a living. I have never stopped believing in the Nigerian dream; this country will overcome its challenges.

Harrysong: This is our country and we must celebrate its achievements. For a country as big as Nigeria, marking 59th Independence anniversary is not a joke, it is a big deal and we must celebrate it despite the enormous challenges we are currently facing. Everybody is feeling the heat; entertainers, business owners and corporate bodies. The situation may be very delicate and may look like we are not heading anywhere, we can’t just look away. I pray for love, peace and progress. Having said that, the government must take responsibility for its failures and address all issues with the fear of God and take people into consideration. No citizen is bigger than the other. The government must show the political will to put the country back on track rather than paying lip service to the problems threatening the peace of its people.

Olamide: We should celebrate the day and charge the government on the need to put the country in good shape.

Orezi: Life has been quite tough over the past years but the government keeps telling us we should be calm. I don’t have anything much to say about the Independence Day but I want to urge Nigerians to keep fighting for their rights.

Joseph Robert: The independence celebration is meant to be very symbolic of who we are as a people, our pride and our hopes for the future but the current  state of the economy and security issues, kidnapping, Boko Haram and militancy have dampened the mood in recent  years as the average  Nigerian doesn’t seem  to see any reason  to celebrate. It’s been  survival mode for a while now and one can only hope  and pray  that some of the initiatives instituted by the government  begin to yield positive  results economically and that our chronic security lapses are plugged. We pray for a Nigeria our children would  be proud of.

Mercy Johnson:  Nigeria has come a long way. We are not where we are supposed to be but we are not where we used to be. Government needs to do more. We cannot elect people in positions of leadership and they are not stepping into it. However, we must all bear in mind that Nigeria is a collective project.

Emeka Ike: The country is not in a stable condition. This administration came with a promise to look at the corruption factor. If what they said has integrity and sincerity, it might be difficult for us at the moment, but we have a future, because integrity is the bottom line and sincerity is the platform for development. So, if we can structure properly, I think Nigeria will move forward.

Ogundare appeals to govt on security