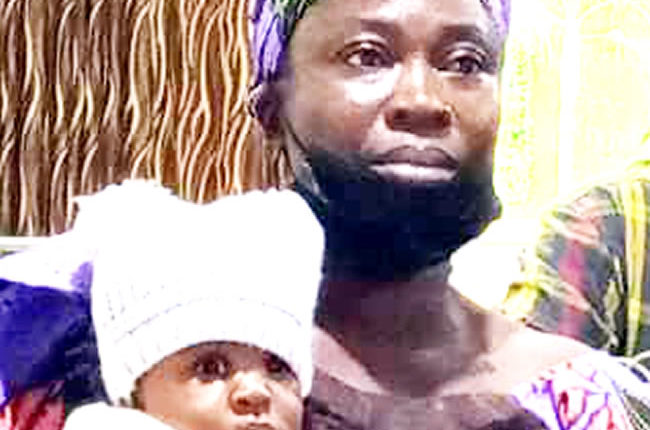 Mrs Helen Alagbe, a 52-year-old woman decided to nurse Jordan, her nephew, when his mother died five days after he was born.  Jordan’s mother couldn’t breastfeed him because she was ill. He was fed water and infant formula at the nursing home where he was delivered in Inaleinde, a suburb of Ibadan, Oyo State.

“I asked that they allow me to nurse him rather than taking him to the motherless babies’ home. I realised that as a wet nurse, I could improve his chances of survival because he would still get to take breast milk from me,” Alagbe declared.

Alagbe’s last baby was born 20 years ago and now in school with his other siblings.  Jordan, now five months-old, by human instinct, started to suck Alagbe’s nipple when he was put to the breast.

“By the second day of sucking “water” started coming out when my nipples were pressed. And even at night, I would allow him to suckle and sleep off,” she said.

“It was funny initially to my husband but I responded that it was something that was  possible based on CS-SUNN’s training on benefits of early initiation of breastfeeding I had attended,” she added.

Officer Lina, who had just given birth herself, explained: “The baby wouldn’t stop crying and we were all worried. I am a new mother; I could feel how anxious the child’s mother would have been. All I thought about was to try my best and comfort the tiny baby.”

In either case, wet-nursing is an effective technique to ensure every baby gets breast milk. A wet nurse is a “woman other than the baby’s birth mother who breastfeeds a child” whether that’s because the birth mother is unable to breastfeed, dead or because she doesn’t want to.”

There are many more wet nurses out there. Why people just don’t always talk about it is because it is mostly within close circles of families and friends who try to ensure child’s survival. They usually find the subject of wet-nursing uncomfortable. But, there is no legal reason, however, why women who wish to wet nurse or use a wet nurse cannot do so.

But before the introduction of the feeding bottle in the 19th Century, women who were unable or unwilling to breastfeed turned to another option – a wet nurse. Wet nursing was considered the safest and most popular alternative form of nutrition until further options were invented.  It is very common in Northern Nigeria, where mothers often breastfeed their grandchildren. The grandmothers up north are usually 35yrs and above.

He declared: “Many babies have lost their mothers due to reasons such as the prevailing security situation in the country, so we can leverage on this, talking to mothers, to help such children to live. She took action about the boy. You might think that it is a small thing, but it is a great work.”

Mr Adio said a wet nurse will only need the baby to continuously suckle and in two to three days, the milk would come down to ensure the baby can also enjoy breast milk.

A Consultant Nutritionist, Mr John Egbuta, in an interview with the News Agency of Nigeria (NAN), in Lagos, said that grandmothers could breastfeed babies if they were willing to do so.

“First, there has to be a willingness, passion, and commitment towards the survival of that baby (that needs to be breastfed). Breast milk, actually, is produced from the brain. When the person who is going to start breastfeeding develops the passion, the willingness and the love for that child, the brain has hormones that are able to change the orientation of that woman, who is going to start breastfeeding.

“And before you know it, the breast begins to produce breast milk again. So, unless there is no willingness on the part of that grandmother, breastfeeding is possible.”

He, however, advised any woman willing to breastfeed another’s child to ensure that she was certified healthy and free of any form of infection.

The ISI EWU they talk about