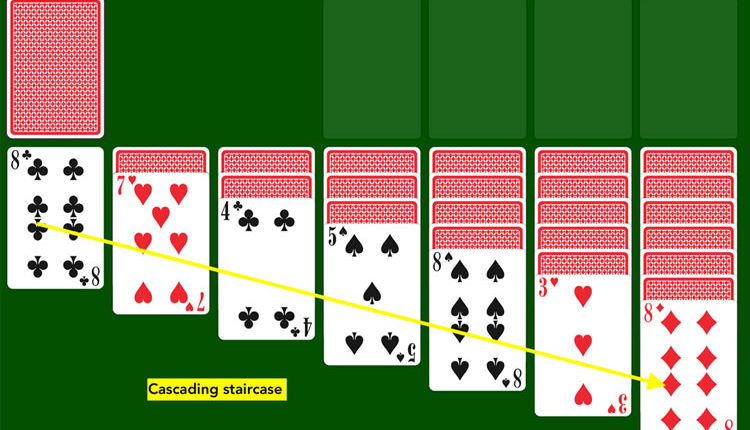 Solitaire is a simple yet addictive card game. You have the option of playing it offline. However, random deals that are available online are better. In the game of solitaire, the 52 cards of a deck are arranged in four different piles. The main table consists of seven columns and it has four piles with face-down cards. In order to win a game of solitaire, the player has to move all the cards of the seven columns to the four piles. The four goals can hold one exclusive suit each and all the cards of the suit need to be placed in the following order: Ace, 2, 3, 4, 5, 6, 7, 8, 9, Jack, Queen and finally the King. The player should know how to utilize the opportunity to win the game.

Playing solitaire online is fun because you can do many variations of deals, you can undo a move and do a correct move, sometimes you can also get a hint and the timer makes the game a lot more interesting. Here are 5 solitaire card games sites where you can play the game online.

Solitaire website was officially launched in 2019 with a variety of card games collection which features Spider Solitaire, FreeCell Solitaire and many more. Even though the website runs on ads, we can guarantee you that it won’t be interfering with our gameplay, as the user will have to scroll down the website to see the advertisement. So, the website runs on non-invasive ads. You can also check the game rules if you are unfamiliar with it. The customization options which are available for the game of solitaire include whether you want to flip one card or three cards, whether you want to use the simple deck or not. You can also choose whether the game should support auto finish or not. In addition to that, you can also determine the game speed. The website supports the undo feature and has a timer and shows the move count.

Created in 2007 by Robert, World of Solitaire hosts 100 solitaire games including Pyramid, Spider, FreeCell and Klondike. You can play on this website for free of cost. It was created using JavaScript and HTML 5 and can be played on any browser, no matter whether you are playing it on a computer or your smartphone. The website was created to provide a high-quality experience to the player in a hassle-free manner. Currently, more than 2,00,000 players play solitaire on this website every day. You can play the game without registration. However, if you want to review the stats later, you also have the option of registering yourself on the website. The game provides you with the stats of the number of moves made, time taken to win the game and your final score. You can customize both the deck and background of the game. Further, from the settings section, you can customize the following options: autoplay, suit order, game info, sound, language and card animation. It also features a global leaderboard too.

The app has a simple interface and supports only the timer and the undo feature. From the Settings section, you can customize the autoplay and the sounds options. From the statistics option present in the Settings, you can check the following stats: games played, games won, percent won, wins without undo, record time, longest win streak and current win streak. 247 Solitaire also supports many variations of solitaire games like 1 card solitaire, FreeCell solitaire, Spider solitaire, scorpion solitaire, wasp solitaire and Yukon solitaire. In addition to that, you can also use this website to play additional games like Mahjong, Sudoku, Poker, Chess and Crossword. All the games available on 247 Solitaire can be played for free.

Solitr was created in November 2011 by Jo. The website has a very clean interface which will help you to focus just on the game with no annoying advertisements at the sight. The website only features the undo option. If you want to see the score, you can turn on the display score tab. Another available customization includes how many cards to turn at once? The solitaire game Solitr doesn’t support any timer and statistics. Apart from solitaire, you can also play Spider, Mahjong and Sudoku on this website. All these games are present in the top menu bar of the website.

Online Solitaire has a visually appealing interface and you can play solitaire online for free here. What makes Online Solitaire different is the fact that you can even download the app version of the game to play online on Windows, Mac, Linux, iOS and Android. It supports unlimited undo and also has a hint feature to help you when you are stuck. You can also choose whether you want to turn one card or three cards at a time. From the Settings, you can customize the background colour, the deck and whether you want to show the spotlight or not. Other customization options include showtime, show score, show moves, autoplay, animation speed, sound and language. You can see both your statistics and global statistics from the statistics tab.

All these five websites are wonderful to play a game of solitaire. You can check them all and then settle for the ones that look best to you.

Computer or Smartphone: Which is Better to Use for Comfortable Gambling at the…

Maryan Shved Moves To UCL: Does This Change The Odds?

Why Will Gambling Never Go Out Of Style?

Gamblers Who Are Also Entrepreneurs